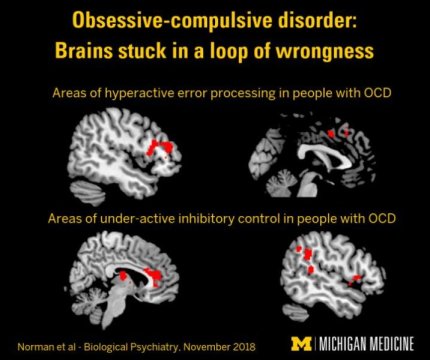 They clean their hands, many times in a row. They click switches on and off, over and over. They check — and re-check, and check again — that they turned the stove off.

No one knows exactly what drives people with obsessive-compulsive disorder to do what they do, even when they’re fully aware that they shouldn’t do it, and when it interferes with their ability to live a normal life.

That lack of scientific understanding means about half of them can’t find an effective treatment.

But a new analysis of brain scans from hundreds of people with OCD, and people without the condition, may help. Larger than any previous study, it pinpoints the specific brain areas and processes linked to those repetitive behaviors.

Put simply, the study suggests that the brains of OCD patients get stuck in a loop of “wrongness,” that patients can’t stop even if they know they should.

Researchers from the University of Michigan gathered together the largest-ever pool of task-based functional brain scans and other data from OCD studies around the world, and combined them for a new meta-analysis published in Biological Psychiatry.

“These results show that, in OCD, the brain responds too much to errors, and too little to stop signals, abnormalities that researchers had suspected to play a crucial role in OCD, but that had not been conclusively shown due to small numbers of participants in the individual studies,” says Luke Norman, Ph.D., lead author of the new study and a postdoctoral research fellow in the U-M Department of Psychiatry.

“By combining data from ten studies, and nearly 500 patients and healthy volunteers, we could see how brain circuits long hypothesized to be crucial to OCD are indeed involved in the disorder,” he says. “This shows the power of doing this kind of research more collaboratively.”

“This analysis sets the stage for therapy targets in OCD, because it shows that error processing and inhibitory control are both important processes that are altered in people with the condition,” says Fitzgerald.

“We know that patients often have insight into their behaviors, and can detect that they’re doing something that doesn’t need to be done,” she adds. “But these results show that the error signal probably isn’t reaching the brain network that needs to be engaged in order for them to stop doing it.”

Zeroing in on brain differences

In their paper, the researchers focus on the cingulo-opercular network. That’s a collection of brain areas linked by highways of nerve connections deep in the center of the brain. It normally acts as a monitor for errors or the potential need to stop an action, and gets the decision-making areas at the front of the brain involved when it senses something is “off.”

The pooled brain scan data used in the new paper was collected when OCD patients and healthy people were asked to perform certain tasks while lying in a powerful functional MRI scanner. In all, the new analysis included scans and data from 484 children and adults, both medicated and not.

Norman led the combining of the data in a carefully controlled way that allowed for the inclusion of brain scan data from studies conducted as far apart as the Netherlands, the United States and Australia.

It’s the first time a large-scale analysis has included data about brain scans performed when participants with OCD had to respond to errors during a brain scan, and when they had to stop themselves from taking an action.

A consistent pattern emerged from the combined data: Compared with healthy volunteers, people with OCD had far more activity in the specific brain areas involved in recognizing that they were making an error, but less activity in the areas that could help them stop.

The researchers recognize that these differences alone aren’t the full story — and they can’t tell from the available data if the differences in activity are the cause, or the result, of having OCD.

But they suggest that OCD patients may have an “inefficient” linkage between the brain system that links their ability to recognize errors and the system that governs their ability to do something about those errors. That could lead their over-reaction to errors to overwhelm their under-powered ability to tell themselves to stop.

“It’s like their foot is on the brake telling them to stop, but the brake isn’t attached to the part of the wheel that can actually stop them,” Fitzgerald says. “In cognitive behavioral therapy sessions for OCD, we work to help patients identify, confront and resist their compulsions, to increase communication between the ‘brake’ and the wheels, until the wheels actually stop. But it only works in about half of patients. Through findings like these, we hope we can make CBT more effective, or guide new treatments.”

Translating the findings to clinical care

While OCD was once classified as an anxiety disorder, and patients are often anxious about their behavior, it’s now seen as a separate mental illness.

The anxiety that many OCD patients experience is now thought to be a secondary effect of their condition, brought on by recognizing that their repetitive behaviors are not needed but being unable to control the drive to do them.

The U-M team will test techniques aimed at taming that drive, and preventing anxiety, in its clinical trial of CBT for OCD. The study is currently seeking teens and adults up to age 45 who have OCD, and healthy teens and adults who do not. It involves two brain scans at U-M’s research fMRI facility, and 12 weeks of free therapy between the first and last scan.

Fitzgerald notes that rTMS (repetitive transcranial magnetic stimulation) which was recently approved by the FDA to treat OCD, targets some of the circuits that the U-M team has been working to identify.

rTMS focuses magnetic fields on certain areas of the brain from outside the skull. “If we know how brain regions interact together to start and stop OCD symptoms, then we know where to target rTMS,” she says.

For severe cases of OCD, brain surgery techniques have emerged in the last decade as an option — and the new results are consistent with their effects. In such cases, neurosurgeons either disconnecting certain brain areas from one another with tiny burst of energy or cuts, or insert a permanent probe that can stimulate activity in a particular area.

The authors of the new paper call for neurosurgeons to consider the new findings about the role of the brain areas involved in the cingulo-opercular network in both inhibitory control and error processing when deciding whether and where to intervene.

The bottom line for patients

The researchers also call for studies that use genetic tests and repeated fMRI brain imaging of the same OCD patients over time, in what’s called a longitudinal study. That could help researchers piece apart the “chicken and egg” issue of whether the problems with error processing and inhibitory control lie at the heart of OCD, or whether they’re the effects of the symptoms of OCD.

In the meantime, Norman, Fitzgerald and Taylor hope that people who currently have OCD, and parents of children with signs of the condition, will take heart from the new findings.

“We know that OCD is a brain-based disorder, and we are gaining a better understanding of the potential brain mechanisms that underlie symptoms, and that cause patients to struggle to control their compulsive behaviors,” says Norman.

Adds Fitzgerald, “This is not some deep dark problem of behavior — OCD is a medical problem, and not anyone’s fault. With brain imaging we can study it just like heart specialists study EKGs of their patients — and we can use that information to improve care and the lives of people with OCD.”

The study was funded by the National Institutes of Health (MH102242).