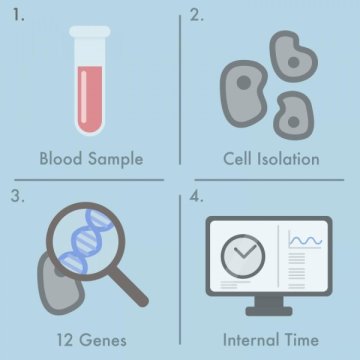 With a new blood test, researchers at the Charité — Universitätsmedizin Berlin can determine the state of the internal clock of a person. Once the internal rhythm of patient is known, drugs could be administered at particular times of day making them more effective and with fewer side effects than standard therapy. The study was published in The Journal of Clinical Investigation.

Time of day dependent rhythms underlie many functions of the human body. This is illustrated by the fact that the efficacy of drugs changes depending on when during the time of day they are administered. This effect varies from person to person based on whether the person is early or late type, or in other words, based on whether the person is a morning lark or a night owl.

The goal of the international team, under the leadership of Prof. Dr. Achim Kramer from the Institute for Medical Immunology at the Charité, was the identification of biomarkers in blood that characterize the so-called internal time of an individual. First, the activity of all 20,000 genes in a particular blood cell-type over the course of a day was measured from multiple subjects. With specialized computer algorithms, twelve genes were identified that reliably report internal time. The biomarkers in a single blood sample can differentiate early from late types even if the person got up in the morning using an alarm clock — against the biological clock.

Prof. Kramer is convinced that chronotherapy could be superior to standard therapy; “Such a therapy taking time of day into consideration has been rarely applied until now, since a simple diagnostic was unavailable. We think this novel objective test of internal time can contribute to time of day gaining more meaning in diagnosis and therapy.”

In future clinical studies, the scientists plan to demonstrate greater effectiveness of personalized chronotherapy. For that, the therapy will be adapted to the patient’s internal time. When the time window with maximum drug effectiveness is known, the effect of the treatment can be optimized and simultaneously the risk of side effects can be minimized.