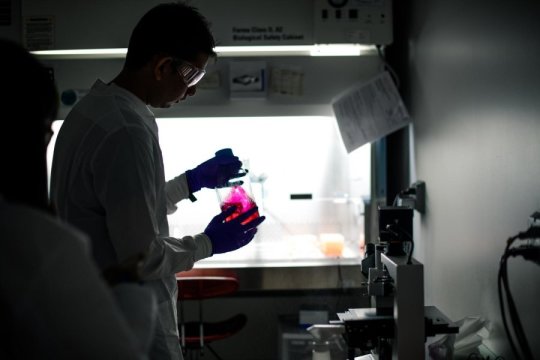 The team’s research paper, published in Theranostics, focuses on developing a stem cell cardiac patch made with tissue engineered with tiny blood vessels to be like real heart muscled. Their review paper published in Acta Biomaterialia, examines the pros and cons of six innovative strategies for aligning the microvessels in engineered tissues.

The vascular system brings nutrients and oxygen to tissues; important ingredients for successful healing following an organ transplant, heart surgery or skin graft. Microvascular structures, which are capillary-like microvessels, are particularly important and, in order to be effective, must be highly aligned, dense and mature. Engineering biomaterials with such a robust vascular system is difficult and depends on the framework — the scaffold — to grow the cells.

“The significance of microvessel organization in 3D scaffolds has largely been ignored,” Zhao explained. “Microvessels are not the same as cells; people have done a lot of work looking at the alignment of cells but this work on microvessels is still new. Understanding the mechanisms behind microvessel alignment in biomaterials will help us and other biomedical engineers to create better, more refined implants and devices.”

To get there, Zhao and her team reviewed the advantages and disadvantages of six different methods used to align vessels: electromechanical stimulation, surface topography, micro-scaffolding and microfluidics, surface patterning and 3D printing.

The advantages vary quite a bit and focus on the ease or controllability of a method. Electromechanical stimulation is simply stretching; micro-scaffolding and microfluidics make medical testing easier; 3D printing is customizable. However, the disadvantages center on one major challenge: Engineered microvessels tend to be too big — they’re much larger than the real capillaries in heart tissues — and often they’re not dense and mature enough to properly supply nutrients and blood.

Aligning microvessels is a bit like plumbing and mismatched sizes don’t bode well for turning the water on. For some hands-on problem solving, Zhao’s team focused in on biomimicking the microvessel alignment, density and dimension of heart muscle.

To date, the engineering process to create the ideal biomaterial for a prevascularized cardiac patch has not made it to clinical trials. Zhao and her team hope to change that.

“Myocardial infarction is a big problem and currently there is no good treatment for it,” she said. A cardiac patch could help following a heart attack. “The cardiac patch is completely biological, comprised of stem cells with vasculature that mimics real tissue, that could help repair a heart.”

The Theranostics paper delves into the role of microvessels in that process and how an engineered tissue can follow the lead of natural ones. Lead author Zichen Qian, a doctoral graduate from Michigan Tech and now a research scientist at Merck, has worked extensively with Zhao on prevascularized tissues. The University recognized Zhao’s and Qian’s efforts last year with the Bhakta Rath award. After Qian graduated, PhD candidates Dhavan Sharma and Wenkai Jia continued this research. The team says heart muscle is one of the trickiest tissues to work with.

“In the heart muscle, the cells are highly aligned for electromechanical signal transaction and the microvessels are also highly aligned and dense,” Zhao said, explaining that microvessels in the patch can connect to native vasculature, bringing nutrients and oxygen. Without this, the engineered cardiac patch might die. “But all tissues have this microstructure. It’s everywhere. This technology could be used for skeletal muscles, burn and chronic wound healing and nerve regeneration.”

Zhao and her team have shown the potential of biomimicry to grow microvessels in tissues suitable for a cardiac patch. The next steps will be animal trials and refining medical technology for implants and devices. With the help of tiny, dense, neatly aligned blood vessels, engineered tissues could help hearts, skin, bones and muscles regenerate naturally.