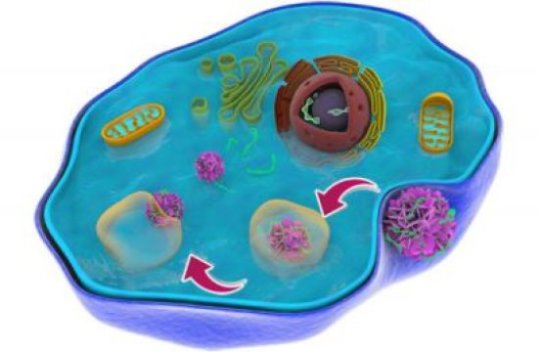 Washington State University researchers have developed a novel way to deliver drugs and therapies into cells at the nanoscale without causing toxic effects that have stymied other such efforts.

The work could someday lead to more effective therapies and diagnostics for cancer and other illnesses.

Led by Yuehe Lin, professor in WSU’s School of Mechanical and Materials Engineering, and Chunlong Chen, senior scientist at the Department of Energy’s Pacific Northwest National Laboratory (PNNL), the research team developed biologically inspired materials at the nanoscale that were able to effectively deliver model therapeutic genes into tumor cells. They published their results in the journal, Small.

Researchers have been working to develop nanomaterials that can effectively carry therapeutic genes directly into the cells for the treatment of diseases such as cancer. The key issues for gene delivery using nanomaterials are their low delivery efficiency of medicine and potential toxicity.

“To develop nanotechnology for medical purposes, the first thing to consider is toxicity — That is the first concern for doctors,” said Lin.

The flower-like particle the WSU and PNNL team developed is about 150 nanometers in size, or about one thousand times smaller than the width of a piece of paper. It is made of sheets of peptoids, which are similar to natural peptides that make up proteins. The peptoids make for a good drug delivery particle because they’re fairly easy to synthesize and, because they’re similar to natural biological materials, work well in biological systems.

The researchers added fluorescent probes in their peptoid nanoflowers, so they could trace them as they made their way through cells, and they added the element fluorine, which helped the nanoflowers more easily escape from tricky cellular traps that often impede drug delivery.

The flower-like particles loaded with therapeutic genes were able to make their way smoothly out of the predicted cellular trap, enter the heart of the cell, and release their drug there.

“This paves a new way for us to develop nanocargoes that can efficiently deliver drug molecules into the cell and offers new opportunities for targeted gene therapies,” he said.

The WSU and PNNL team have filed a patent application for the new technology, and they are seeking industrial partners for further development.