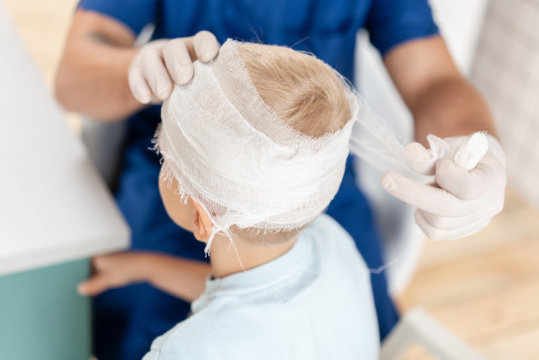 A vast report, looking at the products and activities associated with non-fatal traumatic brain injuries for youngsters aged up to 19, in 66 US hospitals’ emergency departments, has revealed that floors, beds and American football are posing some of the greatest risks.

The study, published in Brain Injury, shows that 72% of cases across all age groups were attributable to consumer products that are regulated by the U.S. Consumer Product Safety Commission.

“Structural designs, such as uneven flooring, often contribute to falls, which is the leading cause of traumatic brain injury in children,” says lead author Dr Bina Ali from the Pacific Institute for Research and Evaluation in the US.

She adds: “In most cases, infants and children are safe in bed and when playing sports outside, but our study highlights some of the risks and the priorities in different age groups for preventing serious head injuries.”

Authors reviewed injury surveillance data from over four years, from (inclusive of) 2010 to 2013. They focused on children and adolescents in five age groups between 0 to 19 years and identified the products associated with their injuries. The investigation provides a comprehensive understanding of the contribution of consumer product-related traumatic brain injuries in children and adolescents.

In infants under a year, a quarter were caused by falling from beds, while floors were the second leading cause at 14%.

The authors highlight bunk beds as especially risky. In children aged one to four years, 10% were caused by beds, 10% by stairs and 10% by floors.

As children became more mobile, the leading causes of head injuries moved outside the home.

“Simple measures such as removing trip hazards, using stair gates and guard rails, avoiding hard surface playgrounds and wearing helmets could help reduce the risk of injury, as well as adult education to ensure proper use of consumer products and adherence to safety guidelines” says Ali.

The authors note several limitations to the study. For example, it only included patients treated in hospital emergency departments, so it could not assess cases treated at doctors’ offices and school health clinics. Due to a lack of location information, the authors were unable to investigate where injuries were sustained. They were also unable to examine how injuries varied by socioeconomic status.