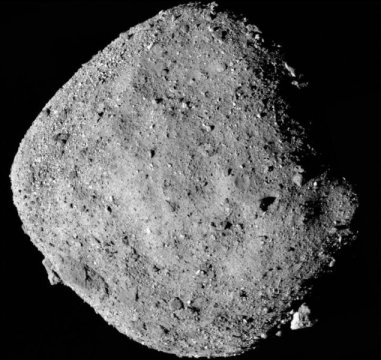 In late 2018, the Origins, Spectral Interpretation, Resource Identification, Security-Regolith Explorer (OSIRIS-REx) spacecraft arrived at Bennu, the asteroid it will be studying and sampling over the next several years.

Now, new research in the AGU journal Geophysical Research Letters shows Bennu is spinning faster over time — an observation that will help scientists understand the evolution of asteroids, their potential threat to Earth and if they could be mined for resources.

Bennu is 110 million kilometers (70 million miles) away from Earth. As it moves through space at about 101,000 kilometers per hour (63,000 miles per hour), it also spins, completing a full rotation every 4.3 hours.

While the increase in rotation might not seem like much, over a long period of time it can translate into dramatic changes in the space rock. As the asteroid spins faster and faster over millions of years, it could lose pieces of itself or blow itself apart, according to the study’s authors.

Detecting the increase in rotation helps scientists understand the types of changes that could have happened on Bennu, like landslides or other long-term changes, that the OSIRIS-REx mission will look for.

“As it speeds up, things ought to change, and so we’re going to be looking for those things and detecting this speed up gives us some clues as to the kinds of things we should be looking for,” said Mike Nolan, a senior research scientist at the Lunar and Planetary Laboratory at the University of Arizona in Tucson, who is the lead author of the new paper and the head of the OSIRIS-REx mission’s science team. “We should be looking for evidence that something was different in the fairly recent past and it’s conceivable things may be changing as we go.”

The OSIRIS-REx mission is scheduled to bring a sample of Bennu to Earth in 2023. Understanding Bennu’s rotational change could help scientists figure out what asteroids can tell us about the origin of the solar system, how likely it is for asteroids to pose a threat to humans and if they could be mined for resources.

“If you want to do any of those things, you need to know what is affecting it,” Nolan said.

In order to understand Bennu’s rotation, scientists studied data of the asteroid taken from Earth in 1999 and 2005, along with data taken by the Hubble Space Telescope in 2012. It was when they looked at the Hubble data that they noticed the rotation speed of the asteroid in 2012 didn’t quite match their predictions based on the earlier data.

“You couldn’t make all three of them fit quite right,” Nolan said. “That was when we came up with this idea that it had to be accelerating.”

The idea that the rotation of asteroids could speed up over time was first predicted around 2000 and first detected in 2007, according to Nolan. To date, this acceleration has only been detected in a handful of asteroids, he said.

The change in Bennu’s rotation could be due to a change in its shape. Similar to how ice skaters speed up as they pull in their arms, an asteroid could speed up as it loses material.

Nolan and his co-authors suggest the reason for the increase in Bennu’s rotation is more likely due to a phenomenon known the YORP effect. Sunlight hitting the asteroid is reflected back into space. The change in the direction of the light coming in and going out pushes on the asteroid and can cause it to spin faster or slower, depending on its shape and rotation.

The OSIRIS-REx mission will determine Bennu’s rotation rate independently this year, which will help scientists nail down the reason for the increase in rotation. Since spacecraft will never visit the vast majority of asteroids, the measurements will also help scientists learn how well ground-based measurements are able to understand these far-away objects.

“By testing these predictions in a few cases, we will significantly improve our confidence in predictions made for other objects,” the study’s authors write.

The measurement of Bennu’s acceleration rate combined with the arrival of OSIRIS-REx at the asteroid gives scientists a great opportunity to validate the new study’s results and test theories about the YORP effect, said Desiree Cotto-Figueroa, an assistant professor of physics and electronics at the University of Puerto Rico at Humacao, who was not involved in the new study.

“This is a great opportunity, in general, having this measurement and having the spacecraft OSIRIS-REx there observing this asteroid to help us better understand this effect, which is a dominant mechanism in the evolution of asteroids,” she said.