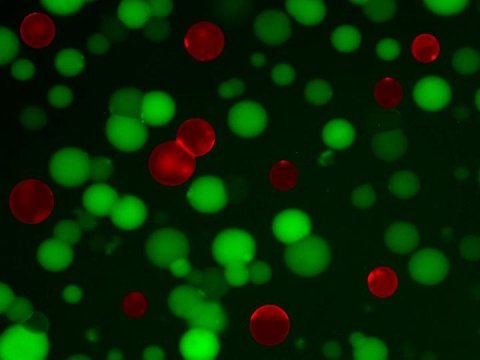 “Lego block” artificial cells that can kill bacteria have been created by researchers at the University of California, Davis Department of Biomedical Engineering. The work is reported Aug. 29 in the journal ACS Applied Materials and Interfaces.

“We engineered artificial cells from the bottom-up — like Lego blocks — to destroy bacteria,” said Assistant Professor Cheemeng Tan, who led the work. The cells are built from liposomes, or bubbles with a cell-like lipid membrane, and purified cellular components including proteins, DNA and metabolites.

“We demonstrated that artificial cells can sense, react and interact with bacteria, as well as function as systems that both detect and kill bacteria with little dependence on their environment,” Tan said.

The team’s artificial cells mimic the essential features of live cells, but are short-lived and cannot divide to reproduce themselves. The cells were designed to respond to a unique chemical signature on E. coli bacteria. They were able to detect, attack and destroy the bacteria in laboratory experiments.

Artificial cells previously only had been successful in nutrient-rich environments, Tan said. However, by optimizing the artificial cells’ membranes, cytosol and genetic circuits, the team made them work in a wide variety of environments with very limited resources such as water, emphasizing their robustness in less-than-ideal or changing conditions. These improvements significantly broaden the overall potential application of artificial cells.

Antibacterial artificial cells might one day be infused into patients to tackle infections resistant to other treatments. They might also be used to deliver drugs at the specific location and time, or as biosensors.