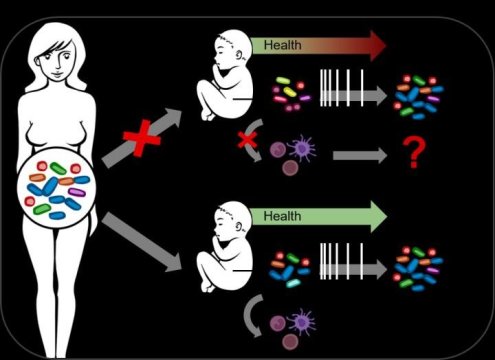 Together with colleagues from Sweden and Luxembourg, scientists from the Luxembourg Centre for Systems Biomedicine (LCSB) of the University of Luxembourg have observed that, during a natural vaginal birth, specific bacteria from the mother’s gut are passed on to the baby and stimulate the baby’s immune responses. This transmission is impacted in children born by caesarean section. “This may explain why, epidemiologically speaking, caesarean-born children suffer more frequently from chronic, immune system-linked diseases compared to babies born vaginally,” says the head of the study Associate Prof. Paul Wilmes. His team has now published its results in the open access journal Nature Communications.

Humans are born germ-free. Yet, birth is normally the time when vitally important bacteria start to colonise the body including the gut, skin and lungs. Researchers have long suspected that this early colonisation sets the course for one’s later health. It could be, however, that a caesarean section prevents certain bacteria, ordinarily interacting with the baby’s immune system, from being passed on from the mother to the new-born. Paul Wilmes, head of the Eco-Systems Biology research group at the LCSB, and his colleagues have now found the first evidence of this in a study of new-borns — half of whom were delivered by caesarean section. Wilmes reports: “We find specific bacterial substances that stimulate the immune system in vaginally born babies. In contrast, the immune stimulation in caesarean children is much lower either because the bacterial triggers are present at much lower levels or other bacterial substances hamper these initial immune reactions to happen.”

This bacterial coloniser-immune system link — together with other factors — could explain why caesarean section babies are statistically more prone to develop allergies, chronic inflammatory diseases and metabolic diseases. “It could be that the immune system of these children is set on a different path early on,” suggests Paul Wilmes. “We now want to further investigate this link mechanistically and find ways by which we might replace the lacking maternal bacterial strains in caesarean-born babies, e.g. by administering probiotics.”

“Of course, it is already clear that we should not intervene too strongly in the birth process. Babies should only be delivered by caesarean section when it is medically necessary,” Paul Wilmes stresses. “We need to be aware that, in doing so, we are apparently intervening massively in the natural interactions between humans and bacteria.”

Materials provided by University of Luxembourg. Note: Content may be edited for style and length.