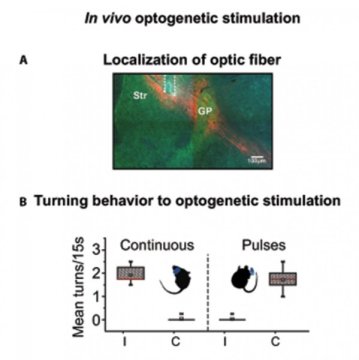 The tell-tale tremors of Parkinson’s disease emerge from abnormal activity in a brain region crucial for voluntary movement. Using a mouse model of the disease, researchers at the Okinawa Institute of Science and Technology Graduate University (OIST) identified unusual patterns of brain activity that appear to underlie its signature symptoms.

Parkinson’s disrupts the basal ganglia, a set of nuclei that relays information from the wrinkled cortex to brain areas important for movement control. A nucleus known as the striatum acts as the primary input hub for the entire structure. Marked by a steep decline in the chemical messenger dopamine and cells that make it, Parkinson’s robs the basal ganglia of the tools it needs to function properly and pushes the striatum into pathological hyperactivity.

“When you take dopamine away, the cells reorganize, and that reorganization leads to most of the symptoms of Parkinson’s,” said Prof. Gordon Arbuthnott, senior author of the study and principal investigator of the OIST Brain Mechanism for Behaviour Unit. The research, published online on January 30, 2019 by the European Journal of Neuroscience, suggests that the striatal neurons’ normal pattern of activity warps when the cells are starved of dopamine. The pattern becomes dominated by one particular subset of cells, often firing in sync. Mice with this pattern of brain activity turn in repetitive circles, which is typical in mouse models of Parkinson’s.

The scientists went one step further: By fitting neurons with light-sensitive proteins, they were able to dial up the striatal activity of normal mice by exposing them to light. Remarkably, the neurons reacted differently to different patterns of light. Continuous light recreated the abnormal, synchronized pattern and caused mice to turn in one direction. But pulsed light excited fewer neurons, triggered more typical striatal activity, and actually caused mice to turn in the other direction.

“The fact that, when I changed the stimulation, the animal turned to the opposite side — that was shocking,” said Dr. Omar Jaidar, first author of the study and a postdoctoral scholar in the Arbuthnott Unit at the time of the research. (Jaidar is now a postdoc with Prof. Jun Ding at Stanford University.) The observation suggests that the Parkinson’s-like symptoms emerge due to the strong activation of many neurons in sync, unchecked by modulatory dopamine signals.

“You need a certain sequence of muscles to contract to execute any movement, and it’s the same with [striatal] neurons,” said Jaidar. Groups of striatal neurons tend to fire in sequence, splitting their work fairly evenly. If this pattern of activity isn’t maintained, he said, the striatum cannot function normally. “People have to dig deeper into the sequence of neurons firing; it could be important to future therapies.”

These results contradict existing models of Parkinson’s disease, which focus on how the condition affects different types of neurons. Two types of cells, known as striatal output neurons, receive dopamine in the striatum and react to its signal. The first type, called D1 neurons, are thought to help initiate movements while D2 neurons suppress them. Normally, the cells work together in harmony, modulating movement in real-time like the gas pedal and brake in a car. Many models suggest that D2 neurons are overactive in Parkinson’s and inhibit movement to the point of causing stiffness, tremors and even freezing.

But reality may not be so simple.

“Cells don’t just have ‘plus’ and ‘minus’ — they have analog signals,” said Arbuthnott. “And if you have a large group of them, the signal is even more complex.” The new study demonstrated that both D1 and D2 neurons contribute equally to the abnormal brain activity seen in Parkinson’s models. It’s not a matter of D2 overpowering D1, but rather, the entire system warps in the absence of dopamine.

By understanding how patterns of activity change on a circuit level, scientists may be able to develop better interventions for Parkinson’s. For instance, this line of research might demystify how deep brain stimulation helps quell parkinsonian symptoms. Is there a better way to electrically stimulate the brain and improve the quality of life for patients?

“The whole circuit is still there, intact,” said Jaidar. “The only thing that’s missing are those modulatory processes, and that’s where therapies come in.”