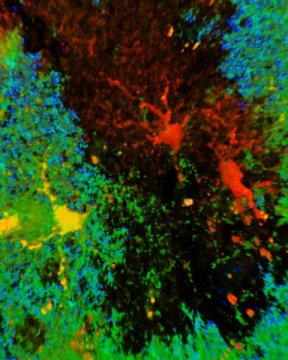 Researchers at the Fralin Biomedical Research Institute at VTC have identified a cellular response in mice to mild traumatic brain injuries that may lead to seizures.

Traumatic brain injury is a leading cause of epilepsy, which is characterized as the repeated occurrence of seizures. No treatments currently interrupt the process that the brain undergoes after injury that can eventually lead to the chronic condition of epilepsy.

The study, published today in JNeurosci, suggests that the development of epilepsy triggered by mild traumatic brain injury may be related to an atypical response from brain cells known as astrocytes, which change to form scars after a severe brain injury. This process is important to protect uninjured brain areas but comes at a price, because these scars have been associated with epilepsy.

The scientists found that astrocytes do not form scars after mild traumatic brain injury, but some astrocytes are altered in a different way almost immediately by these less severe types of injuries. Then, weeks later, the scientists observed spontaneous, recurrent seizures in some mice.

“Our experiments show a strong relationship between changes in astrocytes and the eventual occurrence of a seizure,” said Stefanie Robel, the corresponding author of the study, who is an assistant professor with the Fralin Biomedical Research Institute and at the School of Neuroscience in Virginia Tech’s College of Science. “The findings point to a unique population of astrocytes that respond within 30 minutes of an injury being at the root of a problem where seizures may occur after a latency period of weeks or months, suggesting a therapeutic window to prevent seizure disorders after concussive injuries.”

They first assumed these pockets of nonfunctioning astrocytes were dead, because they no longer made the proteins that normally identify them as astrocytes. Later, Alex Winemiller, a research assistant at the Robel lab and one of the first authors of the study, discovered the cells were alive, but not reacting to injury in their typical manner.

Researchers compared data from mice that eventually developed epilepsy with mice that never developed seizures and found a correlation between the loss of function in patches of astrocytes and the development of epilepsy.

“Each of these astrocytes is connected to multiple neurons, which make hundreds of thousands of connections, which means the loss of function of even a few astrocytes can be devastating to other cells in the brain,” said Shandra, the first author of the study. “Not only have these astrocytes lost their function, but due to these altered connections, the effects can be widespread to brain cells far away. The degree of this astrocyte dysfunction might be something that defines whether epilepsy develops.”

While it has been known that traumatic brain injury is a leading cause of acquired epilepsy, the precise relationship between such injuries and seizures has been elusive.