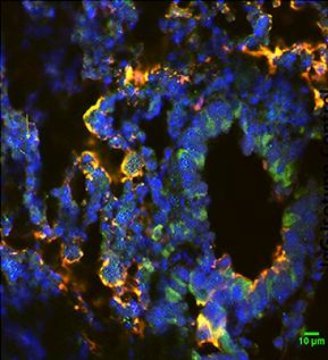 Alcohol increases the mortality of young but not old mice infected with the tuberculosis-causing bacterium Mycobacterium tuberculosis (Mtb), and this effect is mediated by the production of a protein called interferon-alpha (IFN-α). The study, led by Deepak Tripathi of the University of Texas Health Science Center, will be published August 2 in the open-access journal PLOS Pathogens.

Chronic alcohol consumption modulates host immune defense mechanisms and increases susceptibility to infections with various pathogens such as Mtb. However, limited information is available about the mechanisms involved in alcohol-mediated host susceptibility to Mtb and other intracellular bacterial infections, particularly in old individuals. To address this question, Tripathi and colleagues used a mouse model and human blood samples to determine the effects of chronic alcohol consumption on immune responses during Mtb infection.

Alcohol increased the mortality of young mice but not old mice with Mtb infection. The increased mortality in alcohol-fed Mtb-infected young mice was due to IFN-α production in the lungs by a subset of immune cells that express molecules called CD11b and Ly6G. Among patients with latent tuberculosis infection, peripheral blood mononuclear cells from young alcoholic individuals produced significantly higher amounts of IFN-α than those from young non-alcoholic, old alcoholic, and old non-alcoholic individuals.

The findings shed light on the immune mechanisms involved in alcohol-induced susceptibility to Mtb infection. The results also suggest that young alcoholic individuals with latent tuberculosis infection have a higher risk of developing active tuberculosis infection. According to the authors, the study could facilitate the development of therapies for alcoholic individuals with latent and active Mtb infections.