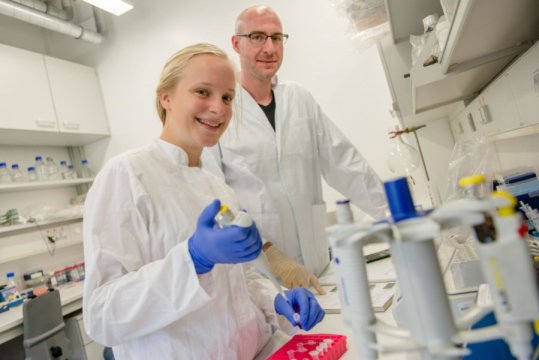 An international team of researchers has now found a possible active substance against the virus in the naturally occurring substance silvestrol. The substance inhibited the replication of pathogens both in cell culture and in the mouse model. The researchers led by Dr Daniel Todt and Prof Dr Eike Steinmann from the Department of Medical and Molecular Virology at Ruhr-Universität Bochum (RUB) reported in the journal Antiviral Research on 23 July 2018.

Silvestrol is formed by around 400 different types of mahogany plants and can be extracted from their leaves. In the past, silvestrol was described as a potential active ingredient against certain tumours and Ebola, but has not yet been in clinical use.

When screening possible active substances against hepatitis E, the researchers — initially still at Twincore, Centre for Experimental and Clinical Infection Research in Hanover, then at the RUB — investigated the effect of silvestrol on the virus. “We first treated what are known as reporter viruses with silvestrol in cell cultures and found that they replicated less than without the treatment,” explains Daniel Todt.

In the next step, the researchers used stem cells that they had differentiated into liver cells. They infected them with hepatitis E viruses — both those they had previously produced in the laboratory and those that came from patients and had been purified. The researchers observed the course of infection with and without silvestrol for several days. “Using specific antibodies directed against the virus, we were able to measure how often the viruses replicated in the infected cells,” explains Daniel Todt.

The Result: Following treatment with silvestrol, the multiplication rate and the number of infected cells dropped sharply. “The effect of silvestrol was stronger than that of ribavirin, the only drug used to date to treat hepatitis E,” explains the researcher. This was shown in infections with all four known genetically different types of the virus that can make people ill.

In order to investigate whether the active substance also inhibits viral replication in living organisms, they tested its effect in mice that were implanted with human liver cells and infected with hepatitis E. Here, too, the treatment with silvestrol led to less replication of the viruses. There were no harmful side effects in small doses.

These results raise hopes that silvestrol might be an effective treatment for hepatitis E. “The clinical potential must be explored in further studies,” says Eike Steinmann. “Our research is laying the foundations for this.”

The Bochum-based researchers are the first to have established a comprehensive test system for active substances against the hepatitis E virus, from cell culture and stem cells to animal models.

The hepatitis E virus (HEV) is the main cause of acute viral hepatitis. After the first documented epidemic outbreak from 1955 to 1956, more than 50 years passed before researchers intensively addressed the topic. Acute infections usually clear up by themselves in patients with an intact immune system. HEV can become chronic in patients with reduced or suppressed immune systems such as organ transplant recipients or HIV-infected patients. HEV is also particularly dangerous for pregnant women. Ribavirin is the only active substance currently in use, but it is not effective in all cases.