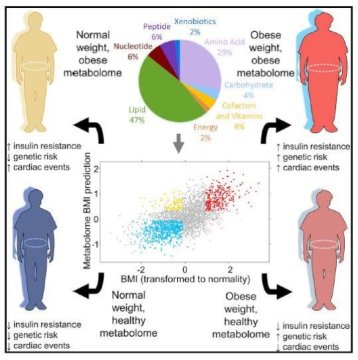 The link between obesity and health problems may seem apparent. People who are obese are at higher risk of type 2 diabetes, liver disease, cancer, and heart disease. But increasingly, researchers are learning that the connection is not always clear-cut. For this reason, they’ve sought to develop better ways to determine who is at an elevated risk of developing these complications.

The current standard for determining obesity is body mass index (BMI), a simple mathematical formula that uses weight and height. Now a paper appearing October 11 in the journal Cell Metabolism is reporting a large study of new ways to measure obesity. The study looked at both the metabolome and the genome, and their relationship to BMI.

“We are attempting to identify the heterogeneity in what we currently call obesity. There’s a need for more precise ways of measuring,” says senior author Amalio Telenti (@atelentia), a genomics professor at Scripps Research. “Although it’s clear that obesity is linked to certain diseases, not everybody who is obese will have these consequences. Also surprising, you may not look obese but still have the problems of someone who is.”

The metabolome is the sum of all the small-molecule chemicals found in a biological sample, often the blood plasma. These chemicals include fatty acids, amino acids, sugars, and vitamins, to name a few. The metabolome changes in response to interactions between the genome and the environment. Those who study metabolomics say it’s poised to become an important part of personalized medicine, along with genomics, proteomics, and analysis of the microbiome.

In the current study, the investigators used data from TwinsUK, a multiyear study examining the genetic and environmental influences on human health and aging. They analyzed body and metabolic measures from nearly 2,000 adult twins that had been collected at three time points over an average of 13 years. They also used data from a single time point for 427 volunteers. They found that about one-third of the metabolites included in the study were associated with changes in BMI.

“For most people, we found the metabolome is tied very closely to weight and BMI,” Telenti explains. “Every time someone gains or loses a pound, their metabolome changes. It’s almost linear.” But at the same time, he adds, “correlating well is not the same as correlating perfectly, and that’s where this work became very interesting.”

“There have been studies before of individuals whose BMI doesn’t match their metabolic health, but this is a new way of defining who is metabolically healthy,” says first author Liz Cirulli (@ETCirulli), a research scientist at Human Longevity Inc. “All across the weight spectrum, we found people who were heavier or lighter than expected based on their metabolome.” These differences were found in a range of metabolites linked to various diseases.

A surprising finding was that genetics didn’t correlate nearly as closely as expected. Differences in genetics between obese and non-obese populations didn’t show patterns that were distinct enough to be predictive. The exception was with a few particular genes known to be connected with extreme obesity, such as mutations in MC4R. This gene is known to play a critical role in regulating food intake and energy balance.

Telenti stresses that the metabolome tests developed for this paper are still an academic development, and much more research is needed before they can be validated and established for clinical use. But eventually, the hope is that it will be possible for someone to get a comprehensive analysis of all the metabolites in their body with one blood test, rather than the battery of tests that’s currently part of a standard physical exam.

Cirulli says that future work will look at defining metabolic signatures for other traits, including blood pressure and android/gynoid ratios — a measure of different types of body fat. In addition, she explains, “It’s important to collect additional longitudinal data in bigger cohorts to see what the long-term health consequences of different metabolic states are.”