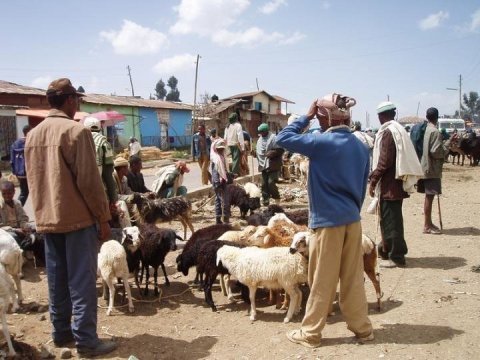 Eradicating peste des petits ruminants is an ambitious objective that is neveretheless looking increasingly realistic, notably thanks to a targeted vaccination strategy centring on production systems that act as a virus reservoir. This was the conclusion drawn by a scientific study published in the journal PNAS.

In theory, the peste des petits ruminants control strategy relies on mass vaccination campaigns. However, although the existing vaccine provides lifelong immunity, such campaigns are both costly and highly complex to implement from a logistical point of view.

The study was initiated by CIRAD and conducted by the Royal Veterinary College (RVC, University of London), in collaboration with Ethiopian and European partners. The researchers combined a dynamic model that simulates virus spread with a national serological study. The information obtained served to assess the level of virus transmission within endemic zones and the vaccine coverage required to halt transmission and eliminate the disease. The results also suggested that some pastoral production systems act as virus reservoirs from which the virus can spread.

For Guillaume Fournié, an epidemiologist at the RVC, “identifying high-risk populations and adapting vaccination strategies to local situations is vital in order to cut the cost of eradicating the disease while boosting the chances of success.”

“Peste des petits ruminants causes huge economic losses and is a particular threat to the livelihoods and food security of the most vulnerable farmers,” François Roger, a CIRAD epidemiologist and co-author of the study, points out. “In view of the limited budgets currently allocated for control of the disease and the numerous constraints in the field, effective decision support tools are vital.”

The OIE and FAO, with the support of the European Union in particular, are launching a global programme to eradicate the disease within fifteen years. This would make peste des petits ruminants the third infectious disease to be eradicated, after smallpox and rinderpest.

This highly contagious viral disease affects almost a billion sheep and goats in Africa, the Middle East and Asia. It causes substantial economic losses due to high morbidity and mortality rates. The role of wild ruminants in the spread of the disease is still largely undetermined, but models could be used to understand it better, like here with buffalos in Africa.

Materials provided by Cirad. Note: Content may be edited for style and length.