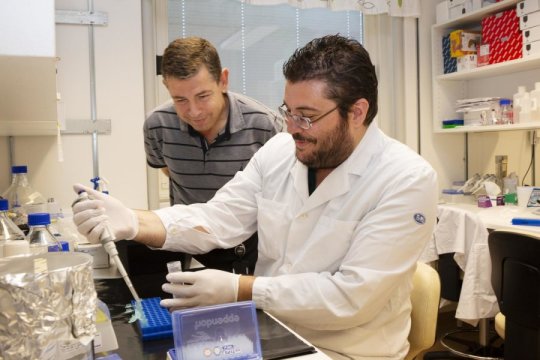 The study links molecular changes in the brain to behaviours that are central in addiction, such as choosing a drug over alternative rewards. The researchers have developed a method in which rats learn to get an alcohol solution by pressing a lever. In order to better capture how addiction makes the individual choose alcohol over other rewards, the researchers offered the rats an alternative to alcohol — sweetened water. When the animals could choose between alcohol and sweetened water, the majority stopped making an effort to get alcohol, and chose the sweetened solution instead. But 15 per cent of the rats continued to choose alcohol, even when they could obtain another reward. This proportion is similar to the percentage of humans with alcohol addiction.

The behaviour of rats that chose alcohol had several similarities to the diagnostic criteria that are used for alcohol addiction in humans, for instance continued use despite negative consequences. This was shown by the observation that they continued to press the lever to get alcohol, even if they got an unpleasant electric shock in the paw.

“We have to understand that a core feature of addiction is that you know it is going to harm you, potentially even kill you, and nevertheless something has gone wrong with the motivational control and you keep doing it,” says Markus Heilig, professor at the Department of Clinical and Experimental Medicine and director of the Centre for Social and Affective Neuroscience.

To investigate the mechanism behind the addiction-like behaviours in the rats, the researchers measured the expression of hundreds of genes in five areas of the brain. The largest differences they found were in the amygdala, which is important for emotional reactions. In the rats that chose alcohol over sweetened water, one gene in particular was expressed at much lower levels. This gene is the blueprint for the protein GAT-3, a transport protein (or ‘transporter’) that helps maintain low levels of the inhibitory signal substance GABA around the nerve cells. This discovery is in line with previous studies that identified changes in GABA signalling in the amygdala as rats developed alcohol dependence.

The researchers investigated the role of reduced transport protein by knocking out GAT-3 in rats that initially clearly preferred sweetened water over alcohol. After the knockdown, the rats were once more presented with the choice between alcohol and sugar.

“Decreasing the expression of the transporter had a striking effect on the behaviour of these rats. Animals that had preferred the sweet taste over alcohol reversed their preference and started choosing alcohol,” says Eric Augier, lead investigator in the project.

Ultimately, the significance of animal findings like this is determined by the degree to which they reflect what happens in humans. To determine if this is the case, the research team collaborated with investigators at University of Texas at Austin, and analysed GAT-3 levels in brain tissue from deceased humans. In individuals with documented alcohol addiction, GAT-3 levels in the amygdala region were lower than in control individuals.

“This is one of those relatively rare times where we find an interesting change in our animal models and we find the same change in the brains of human alcoholics,” said Dayne Mayfield, a research scientist at the University of Texas at Austin’s Waggoner Center for Alcohol and Addiction Research and co-author of the new study. “It’s a very good indication that our animal model is correct. And if our animal model is correct, we can screen therapeutics with it and have increased confidence in the findings.”

“One of the things baclofen does is to suppress GABA release. We are currently working with a drug company to try to develop a second-generation molecule as a candidate for alcoholism medication that targets this signalling pathway,” says Markus Heilig.