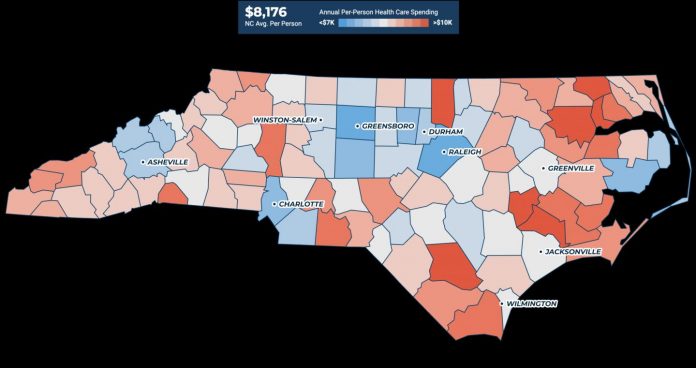 “North Carolinians in our study population spent almost $50 billion on health care per year, or more than $8,000 per person on average,” said Niall Brennan, MPP, President and CEO of the Health Care Cost Institute (HCCI). “Average health care spending per person ranged from as low as $2,500 a year to as much as $19,000 per year depending on age, health status and type of coverage. To address rising levels of health care spending and key drivers of that spending, it’s essential to first know where and how money is being spent, and on what.”

“Together, these data serve as a kind of ‘flashlight’ that illuminates spending patterns in ways that were not easily visible before. Our goal is for this information to serve as a state resource that can promote more in-depth and informed conversations and further research about the main sources of spending and variation across North Carolina,” said Aaron McKethan, PhD, Senior Policy Fellow at the Duke-Margolis Center for Health Policy and Adjunct Professor in the School of Medicine.

Key takeaways from the yearlong project include:

Significant overall spending. Health care services used by North Carolinians in the study population cost $50 billion per year – an average of just over $8,000 per person.

Geographic variation. While annual health care spending averaged $8,176 per person across the total study population, spending per person ranged from $7,272 in Wake County to $10,282 in Jones County even after being adjusted to account for county-level differences in age and gender.

Cost variation by payer type. Average per-person spending varied widely by source of coverage, driven by demographic differences in who qualifies for each coverage source. Per-person spending averaged $15,670 for traditional Medicare, $11,199 for Medicare Advantage, $6,361 for employer-sponsored insurance, and $5,480 for Medicaid, varying by age within each population.

Spending variation by service category. The largest share of spending for North Carolinians with employer-sponsored insurance was for outpatient services, such as routine visits to a doctor’s office. For people with coverage through traditional Medicare, Medicare Advantage, and Medicaid, inpatient services provided in a hospital setting accounted for the largest share of spending.

“Blue Cross NC is in a unique position to analyze a wealth of health cost data and has a long standing commitment to cost transparency to the public and industry,” said Patrick Getzen, FSA, MAAA, Chief Data Officer of Blue Cross NC. “Innovations in data aggregation and analysis are critical to making health care better, simpler and more affordable and this project will inform efforts to improve care throughout North Carolina. Every state should have access to a resource like this.”

The project’s primary aim is to make new resources available for researchers and journalists to better inform North Carolina policymakers and the public about health care spending in the state. Downloadable data include county-level information on selected clinical episodes: stroke, colonoscopy, lower joint replacement, spine MRI, and cesarean section/vaginal deliveries, as well as per-person spending by county for people with diabetes, depression, lung cancer, or opioid use disorder.

The project received generous support from The Commonwealth Foundation and Arnold Ventures, and in-kind technical assistance from Blue Cross NC and the North Carolina Department of Health and Human Services.