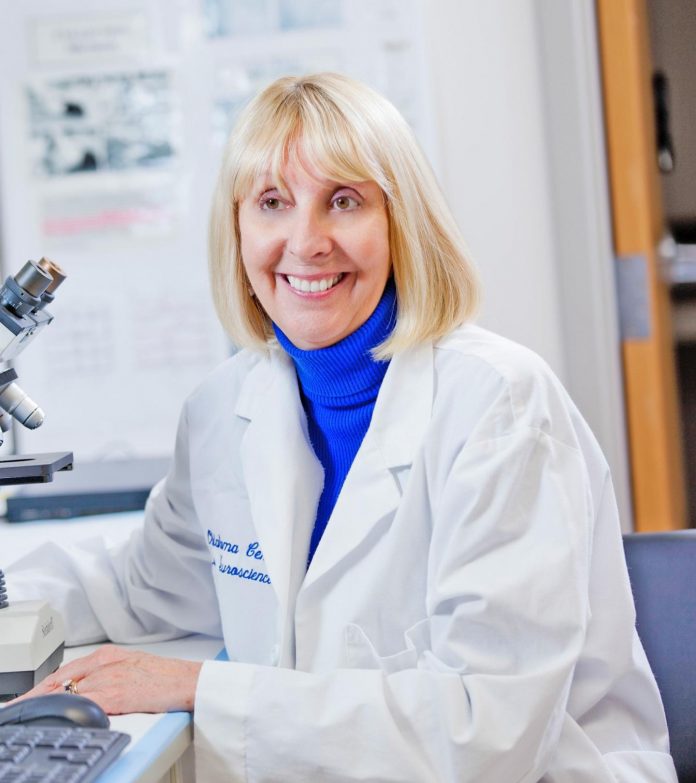 OKLAHOMA CITY — Anyone who suffers from irritable bowel syndrome can testify to its signature trait: It gets worse during times of stress.

However, women with irritable bowel syndrome appear to have more severe abdominal pain than men when they’re under stress. An OU College of Medicine researcher is moving closer to understanding why, and the National Institutes of Health recently validated the promise of her work with a $1.3 million grant.

Beverley Greenwood-Van Meerveld, Ph.D., a professor in the Department of Physiology, director of the Oklahoma Center for Neuroscience, and a Senior VA Career Scientist, has devoted much of her research career to the connection between emotional stress and gastrointestinal problems. Each discovery has served as a stepping stone to another, more specific research project, such as her current work, which seeks to identify mechanisms in the brain that make women with irritable bowel syndrome more susceptible to abdominal pain than men when under stress.

“Irritable bowel syndrome is a difficult condition because along with abnormal bowel habits, people have abdominal pain, often in conjunction with anxiety and depression,” she said. “People feel miserable and there’s nothing that can really treat the pain. While it’s not a disease that will lead to death, it affects quality of life and leads to lost work days. The financial burden to society is huge, and it’s one of the most common disorders that influence women’s work productivity.

“The research question we are asking now is, why are females more vulnerable to abdominal pain? Our hypothesis is that there is an epigenetic change in specific brain nuclei in females,” she said. “Once we know that, we can potentially direct therapies to treat stress-induced pain. Because we have both male and female research models, we can compare and look for molecular mechanisms of coping vs. vulnerability.”

Greenwood-Van Meerveld’s previous research has built the foundation for her current project. Thus far, her research has demonstrated that males with irritable bowel syndrome who are exposed to chronic stress as adults experience increased abdominal pain. Females in the same scenario experience even greater pain.

In addition, she studies different types of stress and how they affect both males and females with irritable bowel syndrome. Her previous research has demonstrated that when exposed to early-life stress that was predictable, both males and females coped well when they encountered stress again in adulthood. However, when the early-life stress was unpredictable, females were far more likely to have pain when they experienced stress again as adults, while males remained resilient.

Her current project, which seeks to identify and compare the mechanisms of stress-induced pain between males and females, is a step closer to potentially devising a solution.

“We know that early-life stress is a risk factor for the development of irritable bowel syndrome later in life,” Greenwood-Van Meerveld said. “But, because research has traditionally used male research models, we need a better understanding of the connection between the brain and the gastrointestinal tract in women.”

Founded in 1910, the University of Oklahoma College of Medicine trains the next generation of healthcare professionals. With campuses in Oklahoma City and Tulsa, the College of Medicine offers the state’s only Doctor of Medicine degree program and a nationally competitive Physician Assistant program. For more information, visit oumedicine.com/collegeofmedicine.

OU Medicine — along with its academic partner, the University of Oklahoma Health Sciences Center — is the state’s only comprehensive academic health system of hospitals, clinics and centers of excellence. With 11,000 employees and more than 1,300 physicians and advanced practice providers, OU Medicine is home to Oklahoma’s largest physician network with a complete range of specialty care. OU Medicine serves Oklahoma and the region with the state’s only freestanding children’s hospital, the only National Cancer Institute-Designated Stephenson Cancer Center and Oklahoma’s flagship hospital, which serves as the state’s only Level 1 trauma center. OU Medicine is the No. 1 ranked hospital system in Oklahoma, and its oncology program at Stephenson Cancer Center and OU Medical Center ranked in the Top 50 in the nation, in the 2019-2020 rankings released by U.S. News & World Report. OU Medicine was also ranked by U.S. News & World Report as high performing in four specialties: Ophthalmology in partnership with Dean McGee Eye Institute, Colon Surgery, COPD and Congestive Heart Failure. OU Medicine’s mission is to lead healthcare in patient care, education and research. To learn more, visit oumedicine.com.