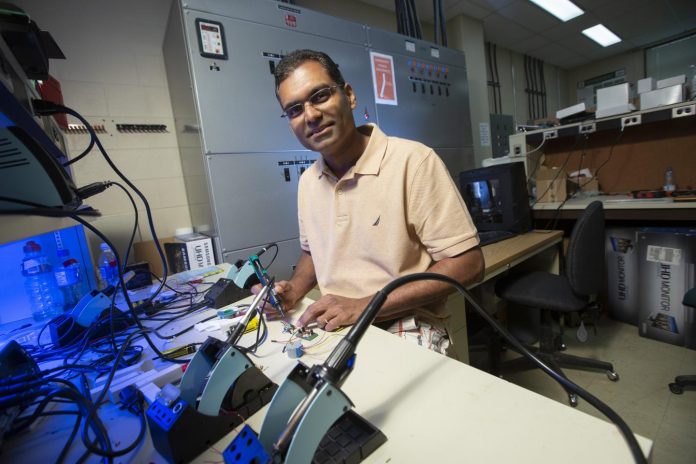 A team led by University of Saskatchewan (USask) researcher Khan Wahid has been awarded $250,000 from the federal New Frontiers in Research Fund to create a new pill-sized capsule that uses artificial intelligence (AI)-enabled sensing to diagnose gastrointestinal cancers and bleeding earlier and more precisely than is currently possible.

Now in prototype development, SmartCap is a new generation diagnostic tool that addresses shortcomings of the 20-year-old wireless capsule endoscopy technology currently used to detect gastrointestinal malignancies and hemorrhages. SmartCap is able to generate location-specific data on tumours and bleeding that results in greater diagnostic accuracy.

With a unique tracking system developed by Wahid’s team, doctors will be able to precisely trace the entire intestinal voyage of the smart capsule due to tiny wireless “intelligent” biosensors that detect and analyze targeted biomarkers (disease indicators) and communicate with external devices such as a computer.

“This new tool could double gastrointestinal cancer survival rates worldwide,” said Wahid, a professor of electrical and computer engineering in the USask College of Engineering. “This is the first fully traceable ‘smart’ pill for targeted endoscopy (a non-surgical way to look inside the body) that can be personalized to the patient.”

The World Health Organization estimates there were 4.6 million new cases of gastrointestinal cancers and 3.3 million related deaths in 2018. About two-thirds of these cancers are detected at an advanced stage, but with earlier diagnoses and treatment, the survival rate of patients almost doubles to 83 per cent.

“The New Frontiers in Research program brings disciplines together in non-traditional ways to explore new directions that push the boundaries of research and have potential for significant impact,” said USask Vice-President Research Karen Chad. “Under professor Wahid’s leadership, this exciting biomedical engineering project for improved cancer diagnosis taps into the innovative and wide-ranging expertise of our talented researchers, enhancing the contribution we are making to tackle major health challenges globally.”

Also on the team are co-principal investigator Kiven Lukong, an associate professor of biochemistry, microbiology and immunology, and Paul Babyn, professor of medical imaging, both in the College of Medicine, as well as Francis Bui, associate professor in electrical and computer engineering. Prof. Svetlana Yanushkevich of the University of Calgary, an expert in AI, is collaborating on the project.

While wireless capsule technology using tiny cameras are currently the only option for capturing images inside the three- to 10-metre-long small intestine, current devices cannot be tracked in the gut precisely, making it impossible for doctors to pinpoint the site of a cancer, polyp, or hemorrhage. Involuntary movements of the small intestine make it further difficult to determine the capsule’s progress.

“It’s like trying to track something in the dark with no reference point, or where the reference points themselves are constantly moving,” said Wahid. “That’s why there has been no change to the hardware and localization side of wireless capsule technology in 20 years, even though image quality, wireless transmission, diagnostic tools, and software have all improved.”

With more than twice as much battery power as conventional wireless capsules, SmartCap’s 24-hour battery power makes detection possible right to the end of the intestinal journey, with improved results due to low-power fluorescence sensors, multispectral light sensors, and localization technology–all being developed in Wahid’s lab.

The on-board fluorescence sensors detect the glow from special dyes injected into a patient to bind with specific cancer cells, identifying the cancer and its location in real time. The multispectral sensor array determines hemoglobin concentration and oxygen saturation of blood passing through a notch on the capsule by analyzing the colour of the blood, indicating whether the bleeding is active, chronic, or a clot. Deep learning AI techniques are be used to improve accuracy.

Tiny image sensors attached to the capsule’s side walls and “digital image correlation technology”–borrowed from the technique used in an optical computer mouse to correlate its movement with the cursor–track the capsule in real time. A tiny unit for measuring velocity and capsule orientation provides data to assist with localization of a tumor.

To eliminate possible false positives, a tiny standard camera is integrated, but will remain mostly in sleep mode, activated only if the AI chip suspects a malignancy.

The team has applied to patent the multispectral array, and plans to follow suit with the fluorescence detection and localization technologies, as well as the SmartCap itself.

“If this is successful, you could use this technology in many other ingestible sensor and implants, even adapt it for use in underground mining and drilling, or in the oil industry to detect and localize pipeline leaks,” said Wahid, who expects to have a SmartCap prototype ready in two years.

The next step will be to find an industry partner to invest in bringing the new product to a wireless capsule endoscopy market that’s expected to reach $650 million this year and grow rapidly with the aging global population.