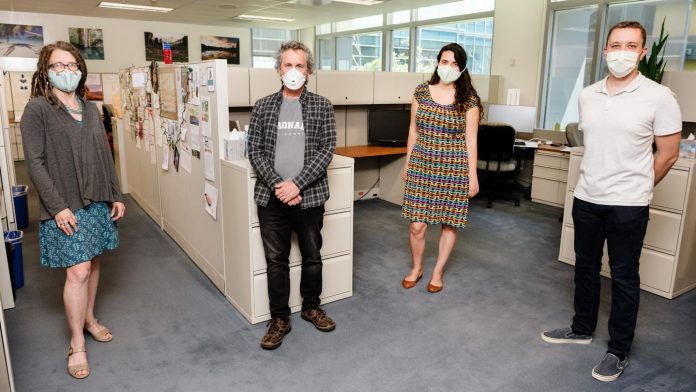 SAN FRANCISCO, CA June 30, 2020–For the nascent brain of a human embryo to develop into the complex organ that controls human consciousness, a finely tuned sequence of genetic events has to take place; hundreds of genes are activated and deactivated in a precise symphony. Mutations in these genes disrupt the molecular instruments of the symphony and, if they occur in genes that are important for brain development, can result in neurological diseases such as autism and epilepsy. Researchers have long struggled to understand how mutations in regulatory regions of the genome–the conductors, rather than the instruments–can also make this process go awry.

Now, researchers at Gladstone Institutes and UC San Francisco (UCSF) Weill Institute for Neurosciences have created a comprehensive region-specific atlas of the regulatory regions of the genome linked to human embryonic brain development.

“This gives us a searchable, data-rich atlas of part of the developing human brain,” said Katie Pollard, PhD, director of the Gladstone Institute of Data Science and Biotechnology. “This is a valuable tool for probing the underlying biology of neurodevelopmental disorders.”

Pollard and UCSF professor of psychiatry John Rubenstein are the senior authors of the new study, published online in the journal Cell.

Only about two percent of the human genome encodes actual genes. Much of the rest of the genome contains regulatory elements, the conductors that control when and where those genes are activated. Genes important for specific aspects of liver function, for example, don’t need to be turned on in brain cells, so different regulatory elements are needed to control gene expression in those tissues.

When researchers analyze the DNA of people with neurodevelopmental disorders, they often uncover dozens, if not hundreds, of natural variations in DNA sequences. However, only a minority of those variants may be related to the disorder itself, and pinning down which are important is difficult.

“Much of the genome is still this vast and mysterious place because we don’t know which parts of the genome play roles in which tissues,” said Eirene Markenscoff-Papadimitriou, PhD, a postdoctoral researcher at the UCSF Weill Institute for Neurosciences and co-first author of the paper.

In the new study, the researchers studied cells from a section of the developing human brain called the telencephalon. This region contains structures responsible for sensory processing, voluntary movement, language, and communication.

The team took advantage of the fact that inside cells, the genome is tightly wound into a dense structure known as chromatin. This three-dimensional structure reveals the important parts of the genome in any given cell by exposing the stretches of regulatory DNA needed for the cell to function. Using a technology called ATAC-seq, the team cut up exposed DNA in embryonic brain cells. By analyzing where these cuts are made, they were able to surmise what parts of the genome are exposed and might contain important regulatory regions.

Their initial experiments revealed more than 103,000 regions of open chromatin in the developing brain cells. To narrow down that list, the researchers turned to a machine-learning approach. They wrote a computer program that uses information already known about regulatory DNA to help pick out patterns specific to brain cells.

“We wanted to whittle this initial list down to a smaller set that was the most likely to be important to regulating brain development,” said Gladstone Research Scientist Sean Whalen, PhD, co-first author of the new paper.

If a regulatory region was similar to one known to only be active in limbs or lungs, for instance, the machine-learning program concluded that it wasn’t a brain-specific enhancer. In the end, the group came up with a set of about 19,000 regulatory regions of the genome expected to play a role in brain development.

To show the utility of the new dataset, the researchers looked more closely at two sections of the genome that appeared in the new atlas that had also been previously implicated in autism and epilepsy. The DNA sequences, they showed, did indeed act as enhancers in brain cells–they had the ability to turn on genes.

“We can now use this approach to ask how all sorts of other mutations affect the non-coding genome,” said Markenscoff-Papadimitriou. “This atlas points us in the direction of specific brain regions that are affected by genetic mutations.”

“We think our data will help a lot of other research groups further their work,” agreed Whalen. Beyond studying diseases, he says the resource will be useful for basic science on how the brain develops.

About the Research Project

To ensure our work does the greatest good, Gladstone Institutes focuses on conditions with profound medical, economic, and social impact–unsolved diseases. Gladstone is an independent, nonprofit life science research organization that uses visionary science and technology to overcome disease. It has an academic affiliation with UC San Francisco. Learn more at gladstone.org.