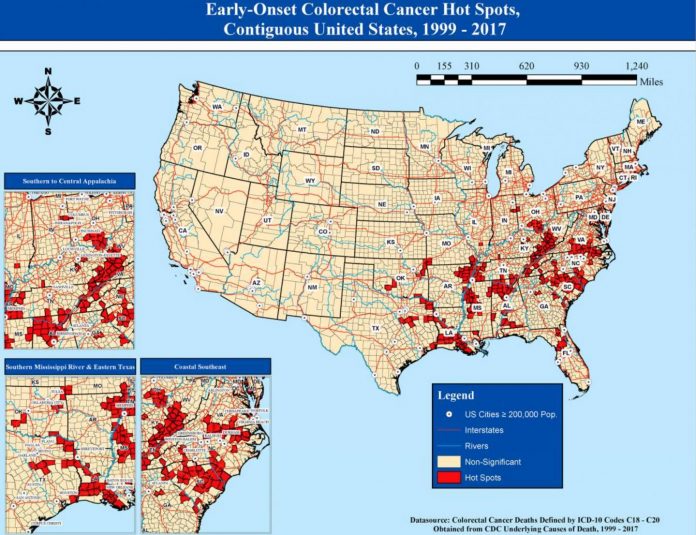 Charles R. Rogers, PhD, MPH, MS, Huntsman Cancer Institute (HCI) cancer researcher and assistant professor of public health at the University of Utah (U of U), is working to better understand these factors in young people with colorectal cancer in order to help improve outcomes and reduce related disparities from this preventable disease. A study led by Rogers and his colleagues, published in the American Journal of Cancer Research, found many of these new diagnoses are occurring in counties in the lower Mississippi Delta, west-central Appalachia, and eastern Virginia/North Carolina. These “hotspot” areas–where colorectal cancer is on the rise and actually killing young men at high rates–revealed several trends about who these men are and how their cancer progresses. The researchers found that young adult non-Hispanic Black men living in these areas are part of a group in which there is an alarming trend of increasing rates of early-onset colorectal cancer, and that these men are more likely to die of the disease as compared to other racial groups.

Rogers and his colleagues developed an analysis of counties with a high rate of early-onset colorectal cancer using data from Centers for Disease Control and Prevention during the years 1999 to 2017. They then linked this to Surveillance, Epidemiology, and End Results (SEER) Program data from the National Cancer Institute for men aged 15 to 49. This revealed 232 hotspot counties for early-onset colorectal cancer in the U.S. The majority of these counties are in the south.

The team then studied a variety of factors of the diagnoses in these hotspot counties. These included age, race, tumor stage and grade, treatment approach, and marital status. In the hotspot counties, they identified that death rates in non-Hispanic Black and Hispanic men with early-onset colorectal cancer outpaced other racial groups studied. In addition, Rogers’s team examined many other health and social factors, such as smoking. The team observed that although roughly 14% of all U.S. adults are current smokers, 24% of the adult population residing in hotspot counties reported currently smoking and having smoked at least 100 cigarettes in their lifetime. “After identifying these geographic disparities, the focus of our study was to better understand the role of individual and county-level characteristics in explaining regional variations in early-onset colorectal cancer survival among these men,” Rogers explained.

Rogers said, “If young men are not already doing so, adults younger than 50 should have conversations with health care providers about early detection screening for colorectal cancer. This is especially the case if they have any symptoms of colorectal cancer, a family history of the disease, or if they live in the ‘hotspot’ counties we have identified for early-onset colorectal cancer.”

Rogers plans to identify early-onset colorectal cancer hotspots in Utah, where his lab is located. The lab studies the health and well-being of underrepresented men through community engagement, research, and education.

Rogers’ team is also working to develop a community-based intervention to increase awareness while reducing incidence and death due to early-onset colorectal cancer in Utah and areas of the country where rates are on the rise.

This study was supported by the National Institutes of Health/National Cancer Institute including P30 CA01420114, K01 CA234319, T32CA190194, and T32HG008962, and by Huntsman Cancer Foundation. The study acknowledges support from key collaborator Justin X. Moore, PhD, of Augusta University in Georgia.

Huntsman Cancer Institute (HCI) at the University of Utah is the official cancer center of Utah. The cancer campus includes a state-of-the-art cancer specialty hospital as well as two buildings dedicated to cancer research. HCI treats patients with all forms of cancer and is recognized among the best cancer hospitals in the country by U.S. News and World Report. As the only National Cancer Institute (NCI)-Designated Comprehensive Cancer Center in the Mountain West, HCI serves the largest geographic region in the country, drawing patients from Utah, Nevada, Idaho, Wyoming, and Montana. More genes for inherited cancers have been discovered at HCI than at any other cancer center in the world, including genes responsible for hereditary breast, ovarian, colon, head, and neck cancers, along with melanoma. HCI manages the Utah Population Database, the largest genetic database in the world, with information on more than 11 million people linked to genealogies, health records, and vital statistics. HCI was founded by Jon M. and Karen Huntsman.