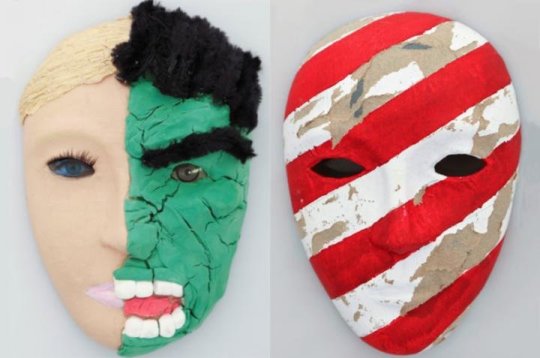 When making visual art during their recovery from traumatic brain injuries (TBI), military service members who depicted psychological injuries like depression or anxiety in their artwork tended to have more acute post-traumatic stress disorder than those who used symbols of their military units, a new study found.

A research team led by Girija Kaimal, EdD, of Drexel University, and Melissa Walker, of Walter Reed National Military Medical Center’s National Intrepid Center of Excellence (NICoE), analyzed the different themes present in masks made by active service members as part of their medical protocol for recovering from TBI. Once identified, the themes were linked to measures of depression, anxiety and PTSD by the researchers.

“Few studies in art therapy have linked visual symbols with existing standardized clinical measures,” explained Kaimal, an assistant professor in Drexel’s College of Nursing and Health Professions. “This helps us see if there are patterns of visual representations that relate to psychological states”

The report is funded by the National Endowment for the Arts through the agency’s Creative Forces initiative that provides creative arts therapy to service members, veterans, and their families at 11 military treatment facilities across the United States. Creative arts therapy can be especially valuable to survivors of traumatic brain injuries because the nature of the injury often makes it difficult for them to verbalize their thoughts and feelings.

Masks created by 370 active duty service members in the first of a four-week creative arts therapy program at the NICoE were analyzed, the study, published by the BMJ Open.

Each mask created in the program starts as a simple, blank human face that participants were encouraged to paint, cut, or add to with the objective of creating a representation of how they felt. Kaimal, Walker and their team categorized the themes they found in each, then matched every mask with data from questionnaires each participant took earlier that measured depression, anxiety, stress, and post-traumatic stress disorder.

More than 10 percent of the masks had symbols relating to the participant’s military units, like a logo or unit patch. Those kinds of masks were tied to lower levels of post-traumatic stress disorder.

“We were surprised by how strongly references to a sense of belonging were associated with positive health outcomes,” Kaimal said.

However, another category was noticed in the masks: “Fragmented representations of military symbols.” These could include faded flags or pieces of camouflage and weapons, and also showed up in around 10 percent of masks. But, this time, it was tied to elevated anxiety in the mask-makers.

More than a quarter of the masks had a representation of psychological injury, which was tied to higher levels of post-traumatic stress disorder symptoms. But roughly a third depicted metaphors, tied to lower symptoms of anxiety.

“The main takeaway is that visual representations embed patterns of strengths and struggles that can help clinicians and researchers better serve this population in coping with their injuries and the psychological symptoms that accompany them,” Kaimal said.

Having focused completely on active military members, it’s unclear if the findings might hold any clues for civilians dealing with recovery from traumatic brain injuries and PTSD. There may also be differences in women versus men that were not observed because the participants were overwhelmingly male.

“Imagery created in other contexts might also be different,” Kaimal said.

Kaimal has been a research collaborator with Creative Forces for several years and has focused especially on the masks made at the start of the four-week program. Moving forward, she hopes to look deeper into the relationships between the imagery and clinical symptoms, with a big focus on whether there are signs in the art later in a patient’s progress that indicates healing and recovery, something therapists will be able to look out for.

“Namely, do certain types of imagery correlate with improved outcomes over time?” Kaimal posed. “We hope to publish those findings in the next few months.”

This study was funded as part of Creative Forces: NEA Military Healing Arts Network, an initiative of the National Endowment for the Arts in partnership with the Department of Defense, Department of Veteran Affairs and state arts agencies.