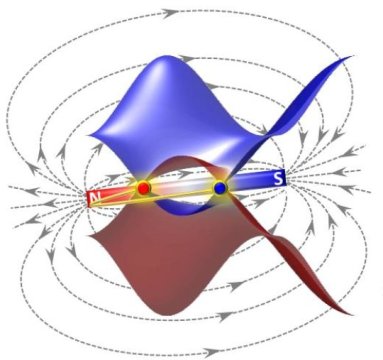 Topology is a global aspect of materials, leading to fundamental new properties for compounds with large relativistic effects. The incorporation of heavy elements give rise to non-trivial topological phases of matter, such as topological insulators, Dirac and Weyl semimetals. The semimetals are characterized by band-touching points with linear dispersion, similar to massless relativistic particles in high energy physics. The interplay of symmetry, relativistic effects and, in magnetic materials, the magnetic structure, allows for the realization of a wide variety of topological phases through Berry curvature design. The Berry curvature describes the entanglement of the valence and conduction bands in an energy band structure. Weyl points and other topological electronic bands can be manipulated by various external perturbations (magnetic field, pressure …), which results in exotic local properties such as the chiral or gravitational anomaly, and large topological Hall effects, concepts which were developed in other fields of physics such as high energy physics and astrophysics.

Weyl semimetals require broken inversion crystal symmetry or time-reversal symmetry (via magnetic order or an applied magnetic field). So far, no intrinsic magnetic Weyl semimetals with Weyl nodes close to the Fermi energy were realized. In the recent study, scientists from the Max Planck Institute for Chemical Physics of Solids in Dresden, in collaboration with the Technische Universita?t Dresden, scientists from Beijing, Princeton, Oxford, and others found evidence for Weyl physics in the magnetic Shandites Co3Sn2S2. The family of Shandite crystals contain transition metals on a quasi 2-dimensional Kagome lattice that can give rise to magnetism. One of the most interesting is Co3Sn2S2 which has the highest magnetic ordering temperature within this family and in which the magnetic moments on the Co atoms are aligned in a direction perpendicular to the Kagome plane.

The observation of the quantum anomalous Hall effect at room temperature would allow for novel computing technologies including quantum computing. To realize this possibility, our strategy is (i) to search for quasi two-dimensional magnetic materials with topological band structures and (ii) to synthesis these materials as monolayers or very thin films. However, so far no magnetic materials are known, which could lead to higher temperature quantum anomalous Hall effect. In order to obtain large Hall angles, namely the ratio of the Hall to the electrical conductivities, two conditions must be satisfied: firstly a large Hall conductivity and secondly a small number of carriers. These conditions are met in Weyl semi-metals where the Weyl nodes are close in energy to the Fermi energy.

We have found that Co3Sn2S2 displays a giant anomalous Hall effect and a giant hall angle at temperatures of up to 150 K suggestive of a Weyl semimetal. Subsequent band structure calculations indeed show the presence of Weyl nodes close to the Fermi energy. Moreover, magnetotransport measurements give evidence for a chiral anomaly that is a clear signature of a Weyl semimetal. Our work provides a clear path to the observation of a quantum anomalous hall effect at room temperature by exploring families of magnetic Weyl semimetals.

This study, for the first time, realizes the giant anomalous Hall effects by using a magnetic Weyl semimetal, which establishes the magnetic Weyl semimetal candidate Co3Sn2S2 as a key class of materials for fundamental research and applications connecting the topological physics and spintronics. With a long-range out-of-plane ferromagnetism on the Kagomé-lattice model for the platform of quantum topological states, we further expect that this material is an excellent candidate for observation of the quantum anomalous Hall state in the two-dimensional limit.

The research at the Max Planck Institute for Chemical Physics of Solids (MPI CPfS) in Dresden aims to discover and understand new materials with unusual properties.

In close cooperation, chemists and physicists (including chemists working on synthesis, experimentalists and theoreticians) use the most modern tools and methods to examine how the chemical composition and arrangement of atoms, as well as external forces, affect the magnetic, electronic and chemical properties of the compounds.

New quantum materials, physical phenomena and materials for energy conversion are the result of this interdisciplinary collaboration.

The MPI CPfS is part of the Max Planck Society and was founded in 1995 in Dresden. It consists of around 280 employees, of which about 180 are scientists, including 70 doctoral students.

Materials provided by Max Planck Institute for Chemical Physics of Solids. Note: Content may be edited for style and length.