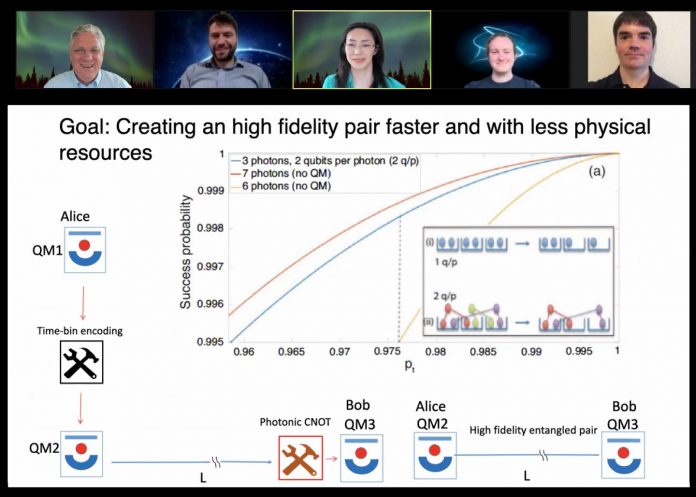 The quantum realm holds the key to the next revolution in communication technology as we know it. With the promise of unprecedented performance and impenetrable security, quantum technology is taking its first steps towards the ultimate goal of applications such as highly encrypted yet nearly fast-as-light financial transactions. However, the ability for quantum computers to communicate with one another has been limited by the resources required for such exchanges, constraining the amount of information that can be traded, as well as the amount of time it can be stored.

Researchers based in Japan have taken a major step toward addressing these resource limitations. They published their findings on May 27 in Physical Review Letters.

“To connect remote quantum computers together, we need the capacity to perform quantum mechanical operations between them over very long distances, all while maintaining their important quantum coherence,” said Professor Kae Nemoto, paper author and director of the Global Research Center for Quantum Information Science at the National Institute of Informatics (NII) in Japan.

“However, interestingly, while quantum computers have emerged at the small scale, quantum communication technology is still at the device level and has not been integrated together to realize communication systems. In this work, we show a route forward.”

Quantum information requires protection from the significant amount of noise surrounding it, as well as the tendency of information to be lost from the initial message. This protection process is called quantum error correction, which entangles one piece of information across many qubits, the most basic unit of quantum information. Imagine a letter torn into nine pieces, each placed in an envelope, with each envelope sent to the same destination to be re-assembled and read. In the quantum world, the envelopes are mailed via photons and there is enough information in each envelope to recreate the entire letter if any of the envelopes are lost or destroyed.

“The overhead to protect quantum information from noise and loss will be large, and the size of the required devices to realize this will cause serious problems, as we have started to see in today’s quantum computer development,” Nemoto said. “As the efforts to realize the quantum internet are occurring worldwide, it is important to think of it as a system, and not simple devices.”

Nemoto and her team addressed this issue using a process called quantum multiplexing, in which they reduced not only noise, but also the number of resources needed to transmit information. In multiplexing, the information contained within two separate photons is combined into one photon, like two envelopes being sent in a portfolio, so the information is still individually protected but only one stamp is needed for transport.

“In this system, quantum error correction will play an essential role, not only of protecting the quantum information transmitted, but also for significantly reducing the necessary resources to achieve whatever tasks one needs,” said paper co-author William J. Munro, a researcher at NTT’s Basic Research Laboratories. “Quantum multiplexing enables significant resource reduction without requiring new technology to be developed for such quantum communication devices.”

The researchers are currently extending their work to large-scale quantum complex network scenarios.

“The quantum revolution has allowed us to design and create new technologies previously thought impossible in our classical world,” Nemoto said. “Small-scale quantum computers have already shown computing performance better than today’s largest supercomputers. However, many other forms of quantum technology are emerging and one of the most profound could be the quantum internet – a quantum-enabled version of today’s internet – which will allow us to network devices together, including quantum computers.”

Next, the researchers will build upon the first steps they have already taken to increase both the amount of information and the storage time.

This work was supported in part by the Japan Society for the Promotion of Science and the John Templeton Foundation.

Other contributors include Nicolò Lo Piparo, Michael Hanks, Claude Gravel and William J. Munro, all of whom are affiliated with the National Institute of Informatics. Munro is also affiliated with the NTT Basic Research Laboratories and the NTT Research Center for Theoretical Quantum Physics.

About the Research Organization of Information and Systems (ROIS)

About the National Institute of Informatics (NII)

NII is Japan’s only academic research institute dedicated to the new discipline of informatics. Its mission is to “create future value” in informatics. NII conducts both long-term basic research and practical research aimed at solving social problems in a wide range of informatics research fields, from fundamental theories to the latest topics, such as artificial intelligence, big data, the Internet of Things, and information security.

As an inter-university research institute, NII builds and operates academic information infrastructure essential for the research and educational activities of the entire academic community (including the Science Information Network) as well as developing services such as those that enable the provision of academic content and service platforms. https://www.nii.ac.jp/en/