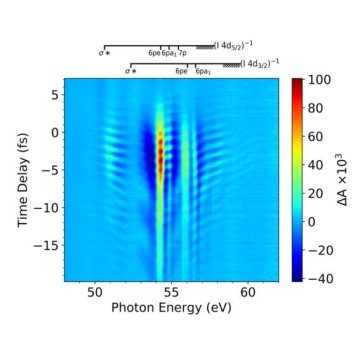 When molecules interact with the oscillating field of a laser, an instantaneous, time-dependent dipole is induced. This very general effect underlies diverse physical phenomena such as optical tweezers, for which Arthur Ashkin received the Nobel Prize in Physics in 2018, as well as the spatial alignment of molecules by a laser field. Now scientists from the Max Born Institute for Nonlinear Optics and Short Pulse Spectroscopy (MBI) report on an experiment in the Journal of Physical Chemistry Letters, where the dependence of the driven-dipole response on the bound state of an electron in a methyl iodine molecule is revealed.

The reported work represents the first attosecond transient absorption spectroscopy (ATAS) experiment on a polyatomic molecule. In an ATAS experiment, the absorption of photons in the extreme ultraviolet (XUV) spectral range (provided in the form of an isolated attosecond pulse or an attosecond pulse train) is studied in the presence of an intense infrared laser field, whose relative phase with respect to the XUV radiation is controlled. By performing such an experiment on molecules, the MBI researchers could access a spectral regime, where transitions from the atomic cores to the valence shell can be compared with transitions from the cores to the Rydberg shell. “Initially somewhat surprising, we found that the infrared field affects the weak core-to-Rydberg transitions much more strongly than the core-to-valence transitions, which dominate the XUV absorption,” says MBI scientist Lorenz Drescher. The published paper is part of his PhD work at MBI.

Accompanying theory simulations revealed that the Rydberg states dominate the laser-dressed XUV absorption due to their high polarizability. Importantly, the reported experiment offers a glimpse into the future. “By tuning the XUV spectrum to different absorption edges, our technique can map the molecular dynamics from the local perspective of different intra-molecular reporter atoms,” explains MBI scientist Dr. Jochen Mikosch. “With the advent of attosecond XUV light sources in the water window, ATAS of light-induced couplings in molecules is anticipated to become a tool to study ultrafast phenomena in organic molecules,” he adds. In this wavelength regime, transitions from core-orbitals in nitrogen, carbon and oxygen atoms are located. MBI is at the forefront of developing such light sources, which will allow the researchers to study the building blocks of life.