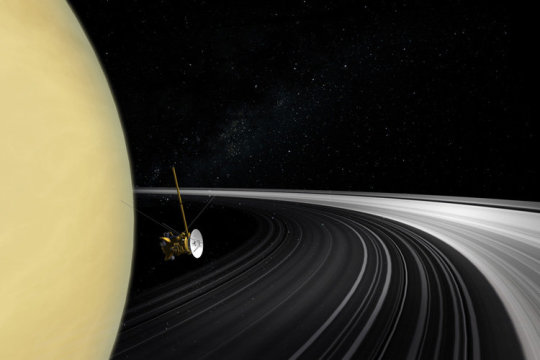 One of the last acts of NASA’s Cassini spacecraft before its death plunge into Saturn’s hydrogen and helium atmosphere was to coast between the planet and its rings and let them tug it around, essentially acting as a gravity probe.

Precise measurements of Cassini’s final trajectory have now allowed scientists to make the first accurate estimate of the amount of material in the planet’s rings, weighing them based on the strength of their gravitational pull.

That estimate — about 40 percent of the mass of Saturn’s moon Mimas, which itself is 2,000 times smaller than Earth’s moon — tells them that the rings are relatively recent, having originated less than 100 million years ago and perhaps as recently as 10 million years ago.

Their young age puts to rest a long-running argument among planetary scientists. Some thought that the rings formed along with the planet 4.5 billion years ago from icy debris remaining in orbit after the formation of the solar system. Others thought the rings were very young and that Saturn had, at some point, captured an object from the Kuiper belt or a comet and gradually reduced it to orbiting rubble.

The new mass estimate is based on a measurement of how much the flight path of Cassini was deflected by the gravity of the rings when the spacecraft flew between the planet and the rings on its final set of orbits in September 2017. Initially, however, the deflection did not match predictions based on models of the planet and rings. Only when the team accounted for very deep flowing winds in atmosphere on Saturn — something impossible to observe from space — did the measurements make sense, allowing them to calculate the mass of the rings.

“The first time I looked at the data I didn’t believe it, because I trusted our models and it took a while to sink in that there was some effect that changed the gravity field that we had not considered,” said Burkhard Militzer, a professor of earth and planetary science at the University of California, Berkeley, who models planetary interiors. “That turned out to be massive flows in the atmosphere at least 9,000 kilometers deep around the equatorial region. We thought preliminarily that these clouds were like clouds on Earth, which are confined to a thin layer and contain almost no mass. But on Saturn they are really massive.”

They also calculated that the surface clouds at Saturn’s equator rotate 4 percent faster than the layer 9,000 kilometers (about 6,000 miles) deep. That deeper layer takes 9 minutes longer to rotate than do the cloud tops at the equator, which go around the planet once every 10 hours, 33 minutes.

“The discovery of deeply rotating layers is a surprising revelation about the internal structure of the planet,” said Cassini project scientist Linda Spilker of NASA’s Jet Propulsion Laboratory in Pasadena, California. “The question is what causes the more rapidly rotating part of the atmosphere to go so deep and what does that tell us about Saturn’s interior.”

Militzer also was able to calculate that the rocky core of the planet must be between 15 and 18 times the mass of Earth, which is similar to earlier estimates.

The team, led by Luciano Iess at the Sapienza University of Rome, Italy, reported their results today in the journal Science.

Did rings come from icy comet?

Earlier estimates of the mass of Saturn’s rings — between one-half and one-third the mass of Mimas — came from studying the density waves that travel around the rocky, icy rings. These waves are caused by the planet’s 62 satellites, including Mimas, which creates the so-called Cassini division between the two largest rings, A and B. Mimas is smooth and round, 246 kilometers in diameter. It has a big impact crater that makes it resemble the Death Star from the Star Wars movies.

“People didn’t trust the wave measurements because there might be particles in the rings that are massive but are not participating in the waves,” Militzer said. “We always suspected there was some hidden mass that we could not see in the waves.”

Luckily, as Cassini approached the end of its life, NASA programmed it to perform 22 dives between the planet and the rings to probe Saturn’s gravity field. Earth-based radio telescopes measured the spacecraft’s velocity to within a fraction of a millimeter per second.

The new ring mass value is in the range of earlier estimates and allows the researchers to determine their age.

These age calculations, led by Philip Nicholson of Cornell University and Iess, built on a connection that scientists had previously made between the mass of the rings and their age. Lower mass points to a younger age, because the rings are initially made of ice and are bright but over time become contaminated and darkened by interplanetary debris.

“These measurements were only possible because Cassini flew so close to the surface in its final hours,” Militzer said. “It was a classic, spectacular way to end the mission.”