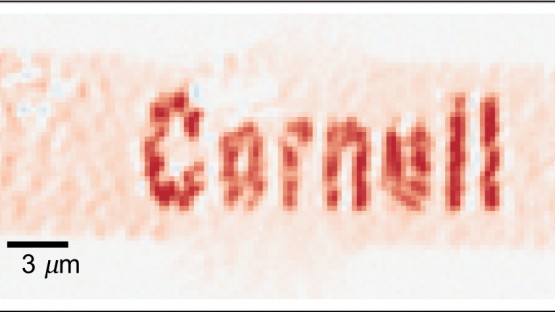 Cornell researchers have demonstrated a technique for writing, erasing and rewriting microscopic magnetic patterns onto a material – a concept tested by writing and erasing “Cornell” eight times onto the sample. This achievement will aid in the research of magnetism for ultrafast computer memory and other applications.

Antonio Mei, a postdoctoral researcher in the group of Darrell Schlom, the Herbert Fisk Johnson Professor of Industrial Chemistry in the Department of Materials Science and Engineering, used molecular-beam epitaxy to stack atomically thin layers of iron rhodium in a strategic arrangement, so that its ferromagnetic and antiferromagnetic phases both became stable at room temperature.

“The sample is equally happy having either strong magnetism or no net magnetism,” Schlom said, “like a teeter-totter that is equally stable resting on the ground with its left seat or its right seat.”

Magnetic patterns are traditionally formed on materials by first configuring a ferromagnetic material’s electrons all in one direction and then configuring selected regions in the opposite direction. But with iron rhodium, the material can begin as antiferromagnetic, and regions can be heated to be ferromagnetic, with those regions remaining strongly magnetic at room temperature.

“It’s like an Etch A Sketch,” said Schlom, referring to a toy in which images can be drawn onto a screen and erased, “where slight heating does the writing and if you wish, slight cooling does the erasing.”

The research team produced a sample of iron rhodium that could exist in either its ferromagnetic or antimagnetic state at room temperature, but to prove the material could be easily transformed and patterned into a chosen state, the sample was brought to the lab of Greg Fuchs, associate professor of applied and engineering physics, who co-led the research with doctoral student Isaiah Gray.

“Based on ideas we had developed looking at iron rhodium in the past,” Fuchs said, “it became clear to everyone that we could do something really interesting with this.”

In 2015 Fuchs pioneered a technique known as magneto-thermal microscopy, in which a laser is used to study a material’s magnetic properties. By heating a microscopic area of a material, the resulting electric voltage can be used to understand the orientation of electrons.

Using a near-infrared laser with a focus of six-tenths of a micron – its diameter 10 times smaller than a red blood cell – Fuchs and his group were able to change the ordering of the electrons within the iron rhodium. Anywhere the laser touched, that microscopic portion of the sample changed from antiferromagnetic to ferromagnetic.

“So if we want to make an image or pattern, we just have to pixelate it by using short laser pulses,” said Fuchs, who developed a proof of concept by magnetically inscribing the word “Cornell” into the sample. Each letter was approximately three microns wide; the average human hair is 75 microns in diameter.

Finally, the researchers dipped the iron rhodium into liquid nitrogen to cool it back into its antiferromagnetic phase, erasing the magnetic “Cornell” pattern. They were then able to write a new pattern into the same sample and repeated the process eight times.

“There was no apparent wearing on the sample and there is no reason to believe it wouldn’t last for more cycles,” Fuchs said. “It’s really a scientific tool now, because you can study magnetism in a configuration, experiment with it, then erase and rewrite.”

The researchers said the magnetic patterning will be useful in a wide range of laboratory settings, including in the field of magnonics, in which scientists study magnetic devices, sometimes requiring days to grow and pattern a single sample.

“Our technique allows us to realize a magnetic structure in a couple of minutes, then we can study it – which might also be just a couple of minutes – then erase it and do something different,” Fuchs said. “It’s going to provide a lot of interesting opportunities to do magnetism research because it’s just a very fast way to change what you have.”

The research was supported by the Semiconductor Research Corporation, the National Science Foundation, the Cornell Center for Materials Research, the Cornell NanoScale Science and Technology Facility, and the Air Force Office of Scientific Research.

Syl Kacapyr is public relations and content manager for the College of Engineering.