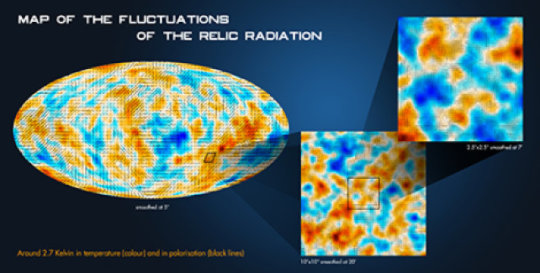 In 2013, ESA’s Planck mission unveiled a new image of the cosmos: an all-sky survey of the microwave radiation produced at the beginning of the Universe. This first light emitted by the Universe provides a wealth of information about its content, its rate of expansion, and the primordial fluctuations in density that were the precursors of the galaxies. The Planck consortium publishes the full and final version of these data and associated articles on the ESA website on 17 July 2018. The corresponding articles have been submitted to the journal Astronomy & Astrophysics. With its increased reliability and its data on the polarisation of relic radiation, the Planck mission corroborates the standard cosmological model with unrivalled precision for these parameters, even if some anomalies still remain. For this work the Planck consortium called upon some three hundred researchers, in particular from CNRS, CNES (the French national space agency), CEA (the French Alternative Energies and Atomic Energy Commission) and several universities in France.

Launched in 2009, ESA’s Planck satellite mapped the cosmic microwave background, microwave radiation emitted 380,000 years after the Big Bang, when the Universe was still a hot, almost completely homogeneous gas. Tiny variations in its temperature provide information about its content, its rate of expansion and the properties of the primordial fluctuations that gave rise to the galaxies. An initial analysis of the data set was published in 2015, in the form of eight all-sky maps that included the polarisation of the cosmic microwave background, which determines how the waves that make up light vibrate on tiny scales. This key information bears the imprint of the last interaction between light and matter in the primordial Universe. However, only a preliminary analysis had been carried out on it.

The polarisation of relic radiation produces a signal 50 to 100 times weaker than that of its temperature and 10 to 20 times weaker than that emitted by the polarized emission of Galactic dust. Thanks to its HFI (High Frequency Instrument), the Planck satellite nonetheless obtained an extremely precise map of primordial polarisation across the entire sky. This was a world first and provides us with a wealth of information.

Comprehensive, definitive and more reliable, the data published on 17 July 2018 confirms the preliminary findings, supporting a model which provides an excellent description of the content of the Universe in terms of ordinary matter, cold dark matter and dark energy* (whose nature is unknown), with an inflation** phase at its very beginning. This cosmological model can now be derived using temperature or polarisation data independently, with comparable accuracy. This considerably reinforces the standard model of cosmology, however surprising this may be***. The results are described in a set of a dozen scientific papers, involving around three hundred researchers.

However, some anomalies and limitations remain. In particular, the rate of expansion of the Universe differs by a few percent depending on whether the data from the Hubble Space Telescope or from the Planck mission are used. This question is still an open one, and a host of telescopes will be marshalled in an attempt to resolve the issue.

*95% of the Universe is made up of dark matter and dark energy, whose nature is not known. Researchers can only detect it through its gravitational effect. The independent and vital contribution of polarisation is thus key to better understanding how the Universe works.

** Polarisation is a property of light in the same way as colour (or frequency) or direction of propagation. Although this property is invisible to the human eye, it is familiar to us (e.g. sunglasses with polarised lenses or 3D glasses for the cinema). It generally provides us with information about the physical processes that gave rise to it.

*** An extremely rapid expansion of the Universe in its very first moments, giving rise to primordial density fluctuations.