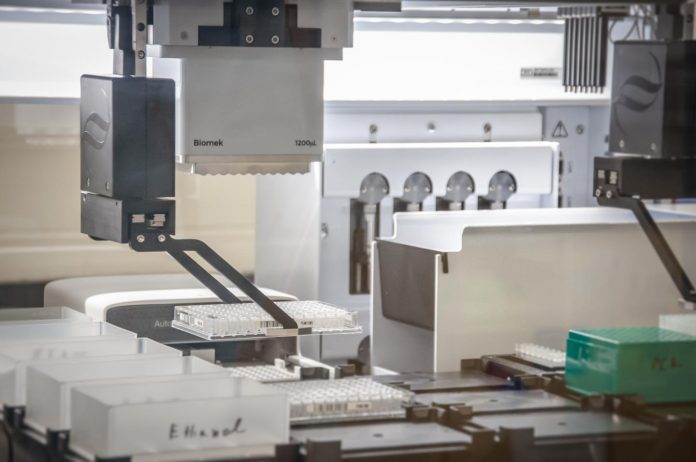 To address the challenges of COVID-19 testing shortages and lagging turnaround times, West Virginia University and the West Virginia Department of Health and Human Resources have teamed up to create a new testing laboratory at the Health Sciences Center thanks to funding made possible by Gov. Jim Justice.

“I cannot thank Gov. Justice enough for his vision and leadership on this vital component in our continued battle against the coronavirus,” President Gordon Gee said. “By directing CARES ACT funding to make this lab a reality, we will be able to facilitate better health outcomes for thousands of West Virginians.”

The WVU Rapid Development Laboratory was established to provide the technical and professional support to develop, validate and implement complex diagnostic testing for SARS-CoV-2, the virus causing COVID-19, which has resulted in more than 56,000 cases and more than 800 deaths in West Virginia as of Monday (Dec. 7).

Dr. Peter Perrotta, chair of Pathology, Anatomy and Laboratory Medicine at WVU and founding director of the WVURDL, said this new lab emerged to help meet the needs of West Virginians throughout the pandemic.

At the onset of the pandemic in spring 2020, hospitals and clinics were unable to perform COVID-19 testing themselves while tens of thousands of samples had to be shipped to labs out of state. That led to undesirable wait times for test results.

The WVURDL started in late September by testing members of the West Virginia National Guard.

“We were able to provide those results in less than 24 hours,” Perrotta said. “Right now, some labs are two or three days behind. At high-demand times, it can take up to a week to 10 days to get results. That’s not particularly helpful if it takes that long.”

The WVURDL is certified by the Clinical Laboratory Improvement Amendments, meaning it meets and exceeds federal industry standards for lab testing. The DHHR’s Office of Laboratory Services is specifically involved with the partnership.

“Aggressive testing of West Virginia citizens is a cornerstone of our strategy for controlling COVID-19 spread in the state,” said Dr. Clay Marsh, WVU Health Sciences vice president and executive dean and coronavirus czar for West Virginia. “To control spread, we need to identify the five to 10 percent of people that spread COVID-19 to 80 percent of others. The best investment in safe schools for teachers, staff and students is controlling the rate of COVID-19 spread in each community. The WVURDL is an example of leveraging the talent of research-focused land-grant universities addressing critical problems of states and allows West Virginia to greatly expand testing capacity.”

The collaboration between WVU scientists and laboratory medicine specialists began when the DHHR reached out to University leaders to provide alternative testing methods that could augment the state laboratories’ testing capacity.

“The problem in the beginning was that there were a limited number of companies doing testing,” Perrotta said. “We struggled because you needed more than just a test kit. You couldn’t collect samples without swabs and media to store the sample, or run the tests without pipette tips.”

The research team, comprised of doctorate-level faculty and technical staff who are virology experts, was led by Dr. Laura Gibson, senior associate vice president of WVU Health Sciences Office for Research and Graduate Education. Gibson was instrumental in finding laboratory space at the Health Sciences for the WVURDL and coordinating all of the research activities related to COVID-19.

“What we are doing in the WVURDL is different than hospital laboratories,” Perrotta said. “Here, we started from scratch and built these tests using equipment and supplies more commonly used by research teams. Even the swabs were produced at WVU under the direction of Gene Cilento and the team at the WVU Innovation Hub.”

There are two main types of diagnostic tests that currently detect SARS-CoV-2: A molecular test, such as a Polymerase Chain Reaction test, that detects the virus’ genetic material; and an antigen test that can detect proteins on the surface of a virus. The WVURDL is focusing on PCR tests, but research teams are exploring antigen tests as an alternative to PCR.

Not only will the WVURDL provide quicker results, it will reduce costs to the state as it can process tests more inexpensively than commercial laboratories. A main goal of the WVURDL is to support the demands of the state and University community.

Currently, the lab can process between 500 and 700 tests daily, with an eye on 1,000 as an end target, Perrotta said. New automation equipment has arrived and this high-tech robotic system is currently being used to speed up the process even more.

“Combining that with the capabilities we have across the state – such as the testing lab in Charleston and many hospitals – we can exceed testing more than 10,000 samples a day in the state,” he said.

This increased capacity will lend itself to any potential future outbreaks and resurgence of the virus, such as those already seen in high-risk environments like nursing homes and prisons. The DHHR is providing the necessary funding for the lab under a cooperative agreement with the Centers for Disease Control and Prevention.

“Since the onset of this pandemic, the importance of increased testing capacity and the ability to receive the results of the testing are paramount to getting this disease under control,” said Maj. Gen. James Hoyer, retiring adjutant general of the West Virginia National Guard who will be joining WVU in an associate vice president role in January. “Through important collaboration with WVU, DHHR and our other state agencies, we have developed another tool in our toolkit to help West Virginia move forward in our fight against COVID-19.”

Beyond the broad implications of the new lab and its fulfillment of WVU’s land-grant mission, Perrotta has been personally gratified watching the WVURDL evolve so quickly.

“I’ve been at WVU for 15 years and have always hoped to develop a research assay that we could move into a clinical environment. This is the first example of such and it would not have been accomplished without the commitment of so many across the WVU community and the state.”