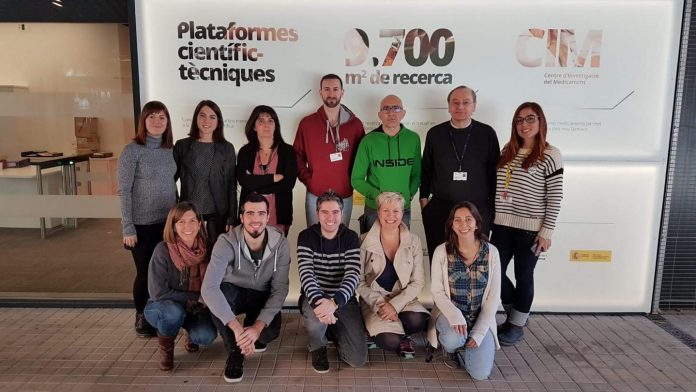 Acute myeloid leukemia (AML) is a heterogeneous disease which usual treatment is very aggressive and produces severe side effects to the patients. In the search for a new and more effective drug, researchers from the CIBER for Bioengineering, Biomaterials and Nanomedicine (CIBER-BBN) have demonstrated the efficacy of a new nanoconjugate, designed in house, that blocks dissemination of leukemic cells in animal models of acute myeloid leukemia.

The results of this research, with the participation of the CIBER-BBN groups at the Institut de Recerca de l’Hospital de la Santa Creu i Sant Pau (Ramón Mangues, Isolda Casanova and Víctor Pallarès), the Institut de Biotecnologia i Biomedicina IBB of the Universitat Autònoma of Barcelona (Antonio Villaverde and Esther Vázquez) and the Josep Carreras Leukaemia Research Institute have been published in the Journal of Hematology and Oncology. Most of the experimental work has been performed in the nanotoxicology and protein production ICTS “NANBIOSIS” platforms from CIBER-BBN.

The researchers have developed a nanomedicine that is specifically targeted to the tumor cells without damaging normal cells. This new protein nanoparticle is bound to a toxin, named Auristatin, which is between 10 and 100 times more potent than the drugs typically used in the clinic. According to CIBER-BBN group leader Ramón Mangues, “we have designed a nanoconjugate that is targeted only to the cells that express in their membrane a receptor called CXCR4, which is overexpressed in leukemic cells. Thus, this nanoparticle can only enter and deliver the toxin into the cells that express this receptor”.

CXCR4 is overexpressed in a large proportion of leukemic cells in patients with poor prognostic or refractory disease, so it could have a major clinical impact on these AML patients. Also, it is worth pointing out that the CXCR4 receptor is overexpressed in more than 20 different cancer types, and its expression is associated with a poor prognosis. Therefore, this nanodrug could be evaluated in the near future as a possible treatment in other tumor types of high prevalence.

Blocks the spread of leukemic cells in mice without toxicity

The researcher team has demonstrated that the nanoconjugate is able to internalize in the leukemic cells through the CXCR4 receptor and kill them. In addition, they have demonstrated the capacity of this nanoparticle to block the dissemination of leukemic cells in a mouse model without associated toxicity or adverse effects. Thanks to its targeting to leukemic cells, it could help AML patients that cannot be treated with current drugs because of their high toxicity, such as this experienced by elderly patients or patients with other non-favorable characteristics that exclude conventional treatment.

Ramón Mangues explains that “the novel nanoparticle could be used to treat patients that have developed resistance to drugs or those that have experienced relapse, since their leukemic cells would likely have high expression of the CXCR4 receptor. Hence, there is a wide range of patients that could benefit of this new treatment, which could have a major clinical impact if its effectiveness was confirmed in further clinical trials”.

The intellectual property of this nanomedicine has been licensed to the SME biotech Nanoligent, which aim is continuing the so far successful access to public and private funds to complete the preclinical development to enter clinical trials in acute myeloid leukemia, before being tested in other cancer types.