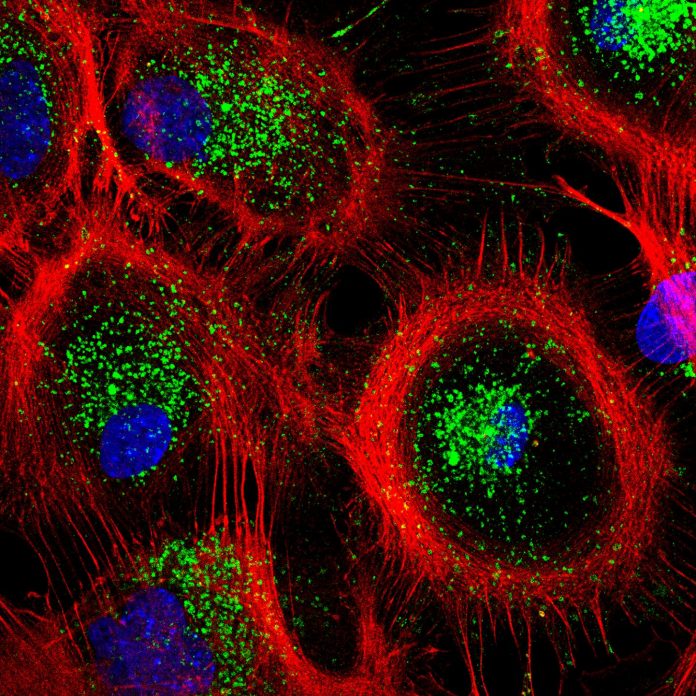 Cellular waste disposal, where autophagy and lysosomes interact, performs elementary functions, such as degrading damaged protein molecules, which impair cellular function, and reintroducing the resulting building blocks such as amino acids into the metabolic system. This recycling process is known to keep cells young and, for instance, protects against protein aggregation, which occurs in neurodegenerative diseases. But what, apart from starvation, actually gets this important system going? Researchers from the Leibniz-Forschungsinstitut für Molekulare Pharmakologie (FMP) in Berlin have now discovered a previously unknown mechanism: osmotic stress, i.e. a change in water and ionic balance, triggers a response within hours, resulting in the increased formation and activity of autophagosomes and lysosomes. The work, now published in “Nature Cell Biology“, describes the new signaling pathway in detail, and provides a crucial basis for improving our understanding of the impact environmental influences have on our cellular recycling and degradation system, and how this knowledge can be used for therapeutic purposes.

Our cells are occasionally in need of a “spring clean” so that incorrectly folded protein molecules or damaged cell organelles can be removed, preventing the aggregation of protein molecules. The mechanisms responsible for this removal are so-called “autophagy” and the closely related lysosomal system, the discovery of which earned the Nobel Prize for Medicine in 2016.

Quite a number of studies suggest that autophagy and lysosomes play a central role in aging and in neurodegenerative diseases. It is also generally agreed that fasting or food deprivation can kickstart this cellular degradation and recycling process. Other than that, little is known about how cells and organs control the quality of their protein molecules, and which environmental influences give the decisive signal to start cleaning up.

Water loss induces the formation of lysosomes and autophagy

A new trigger has now been identified by scientists from the Leibniz-Forschungsinstitut für Molekulare Pharmakologie (FMP) in Berlin: it is osmotic stress, i.e. the state in which cells lose water, that starts the system of autophagy and of lysosomal degradation. The study has just been published in the prestigious journal “Nature Cell Biology“.

“When dehydration occurs, we suddenly see more lysosomes in the cells, i.e. more organelles where aggregated protein molecules are degraded,” explained co-last author PD Dr. Tanja Maritzen. “It’s a clever adaptation because cellular water loss simultaneously fosters the aggregation of proteins. These aggregates must be removed quickly to ensure the continued function of cells, and this works better when cells have more lysosomes.”

The researchers were able to observe what happens at the molecular level in dehydrated cells using astrocytes, star-shaped cells in the brain that assist the work of our nerve cells: in the event of dehydration, the ion transporter NHE7 translocates from the cell’s interior, where it is normally positioned, to the cell’s limiting plasma membrane that shields the cell from the outside. This leads to an influx of sodium ions into the cell, indirectly increasing the level of calcium – a key messenger – in the cytosol. The elevated level of calcium in turn activates a transcription factor called TFEB, which finally switches on autophagy and lysosomal genes. In other words, the system is initiated by the ion transporter NHE7, triggered by osmotic stress.

“This pathway was completely unknown,” stated group leader and last author of the study, Professor Dr. Volker Haucke. “It is a new mechanism that responds to a completely different type of physiological challenge to those previously known.”

Counter experiments revealed the importance of this pathway for human health: when the researchers removed a component of the signaling pathway, such as the transporter NHE7 or the transcription factor TFEB, aggregated protein molecules accumulated in astrocytes under osmotic stress conditions; they could not be broken down. In the study, this phenomenon was demonstrated for components such as synuclein – a protein that plays a role in Parkinson’s disease.

“Neurodegenerative diseases in particular are a possible consequence of this pathway being switched on incorrectly,” stated Tania López-Hernández, post-doc in Professor Haucke’s and Dr. Maritzen’s respective groups, and lead author of the study. “In addition, NHE7 is a so-called Alzheimer’s risk gene. We now have new insights into why this gene could play such a critical role.”

Another interesting point is that an intellectual disability in boys, passed on via the X chromosome, is due to a mutation in the NHE7 gene. The researchers suspect that the disease mechanism is linked to the degradation mechanism that has now been described. If only the switch, i.e. the NHE7 protein, were defective, an attempt could be made to turn on the pathway in another way. “It is very difficult in practice, and extremely expensive, to repair a genetic defect, but it would be conceivable to pharmacologically influence the NHE7 protein or to use other stimuli such as spermidine as a food supplement to switch on the autophagy system in these patients,” explained cell biologist and neurocure researcher Volker Haucke.

In order to carry out such interventions, however, the foundations need to be researched more thoroughly. For example, it is not yet clear how osmotic stress affects the translocation of NHE7 to the cell surface. It is also not known whether the entire degradation system is initiated or whether just individual genes are switched on, or which specific responses to osmotic stress are needed to activate the lysosomal system. Nor is it known which other stimuli may be triggered by this physiological process. The researchers now seek to answer all these questions in subsequent projects.

“Our work has shown us the fundamental impact that our water and ionic balance has on the capability of our cells and tissue to break down defective protein molecules,” remarked Volker Haucke. “Now we want to gain a better understanding of this mechanism – also because it plays a major role in aging, neurodegeneration and the prevention of several other diseases.”