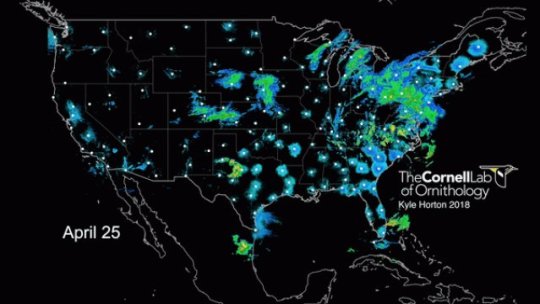 Using a combination of AI and weather forecasting can help scientists to predict the movements of millions of birds and support their conservation goals, according to new Oxford University research.

Conducted in collaboration with Cornell University, the study — published in the journal Science — reports that scientists can now reliably predict these waves of bird migration across the United States, up to seven days in advance. It reveals the underlying methods that power migration forecasts, which can be used as a bird conservation tool.

September is the peak of autumn bird migration, and billions of birds are winging their way south in dramatic pulses. In this study, the researchers reviewed 23 years of spring bird migration across the United States using 143 weather radars, highly sensitive sensors that scientists can use to monitor bird movements. They filtered out precipitation and trained a machine learning model to associate atmospheric conditions with levels of bird migration countrywide. Eighty percent of variation in bird migration intensity was explained by the model.

Benjamin Van Doren, a doctoral student at the University of Oxford and a Cornell University graduate, said: “Most of our songbirds migrate at night, and they pay close attention to the weather. Our model converts weather forecasts into bird migration forecasts for the continental United States.”

Completing the annual migration requires a lot of stamina and using forecasting helps scientists to reduce human-made threats to migratory birds, such as being disorientated by city lights or crashing into tall buildings and power lines that could hinder their journey. Not finding a suitable habitat to stop and recharge at along the way, could result in the birds not finishing their trip on time, or arriving in an unfit state to breed.

“The capacity to forecast where and when birds are likely to be flying is instrumental for conservation goals,” says co-author Kyle Horton, a Rose Postdoctoral Fellow at the Cornell Lab.

In addition to predicting pulses of intense migration, Van Doren and Horton also used the model to estimate nightly migratory movements across the entire country. During peak migration in early May, they say often more than 420 million birds pass overhead each night.

“We used 12 variables to model the distribution of migratory birds across the continent,” explains Van Doren. “Temperature was the most important variable. Migration intensity was greatest on warm nights, probably because warm temperatures generally bring favorable winds and the emergence of leaves and insects.”

The first migration forecast maps based on this research were released to the public earlier this year on the Cornell Lab’s BirdCast website (birdcast.info), where they are updated every six hours. In addition to maps that predict bird movements up to three days ahead, the site also features real-time bird movements based on current weather radar.

“Radars have been illuminating the movement of birds for nearly 75 years — there are still integral discoveries to be made,’ notes Horton. ‘With migration coming into full swing, we’re excited to deliver autumn forecasts for the first time.”