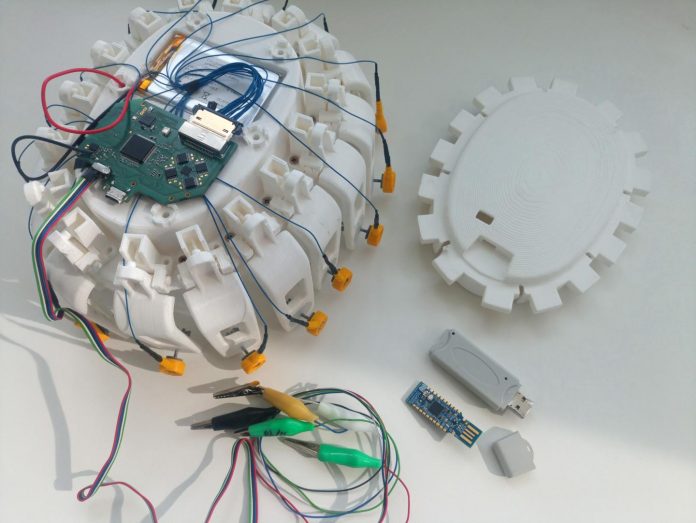 Group of biomedical engineers from biotech company Gruppo Fos Lithuania and researchers at Kaunas University of Technology and Lithuanian University of Health Sciences have patented technology for advanced health monitoring of stroke survivors. It is the first solution in the world which monitors and analyses simultaneously a patient’s health parameters from the affected part of the brain and those of the cardiovascular system.

Stroke is a sudden impairment of the cerebral circulation, resulting in the death of the brain cells, neurons. Neurologists estimate that 1 hour of the interrupted blood supply to the brain is equivalent to 3.6 years of ageing. Therefore, the first rule for the medical personnel while reacting to acute stroke is “time is brain”, which means that help needs to be provided as soon as possible. Post-stroke rehabilitation starts instantly after the medical condition of the patient is stabilised. Global statistics reveal that 18 per cent of stroke survivors experience the second stroke in 4 years’ time.

“Our technology can be used for constant or episodic monitoring both in medical facilities and at home or in similar environments. The prototype for the cerebral circulation measuring equipment is akin to a light helmet placed on the head of the patient; the assistance of medical personnel is required while using it. The cardiovascular health monitoring system prototype is a smart wrist band with several attachable electrodes. It can be used by patients at home”, says Dr Darius Jegelevicius from Kaunas University of Technology (KTU) Biomedical Engineering Institute, the head of the research group behind the invention.

The system created by Lithuanian researchers includes the synchronic recording of the following parameters: electrocardiogram (ECG), photoplethysmogram (PPG, an optically obtained graph that allows detecting blood volume changes in the microvascular bed of tissue) and electrical bio-impedance cerebral monitoring (in order to detect changes on electrical properties of cerebral tissue). These signals can be analysed and compared against each other; any delays, deviations and the dynamics of change are being observed and recorded. Two groups of variables are being measured – those reflecting changes in cerebral tissue, and the indicators of cardiovascular system health. As they are being analysed simultaneously, more information about the health of the patient is being obtained than while interpreting each variable separately.

“Our technology is intended for post-stroke follow-up including monitoring of the brain damage dynamics and observing cardiovascular parameters, such as blood pressure and atrial fibrillation, which are connected to the increased risk of stroke. The patented invention is the system of collecting multimodal signals from the human organism, which can potentially provide us with new information about the health parameters of stroke survivors”, explains the biomedical engineer of Gruppo FOS Lithuania Mantas Mikulenas.

According to him, the system created in Lithuania is the first in the world. There is no equivalent medical technology which would monitor and register all these parameters, vital for preventing the recurrence of stroke among survivors, and would provide integrated advanced analysis of the collected data.

“The main challenge lies ahead – the road of medical technologies to patients is very long, especially if the invention is complex and its efficiency needs to be proved by clinical research. However, we already have a tool, which can be adapted for concrete practical solutions. Hopefully, before long our technology for integrated health monitoring of stroke survivors will be available for medical personnel and patients”, says the director of Gruppo FOS Lithuania Rosita Makauskiene.

The invention is being developed by three partners – Gruppo Fos Lithuania biotech company, Kaunas University of Technology, Lithuanian University of Health Sciences. All the partners contributed equally to the invention accordingly to their fields of competences – development of the idea, technological implementation and medical research and testing.

The first prototype of the system has already been developed. In the near future, it will be tested with patients. The invention is being commercialised by Gruppo Fos Lithuania Biomedical Engineering Centre, established in 2015 by Italian high technology solutions company Gruppo Fos.

The patent for the invention has been issued by The State Patent Bureau of the Republic of Lithuania on 10/04/2020. Patent No. 6729.

The project “Biomedical electronic equipment for post-stroke monitoring (StrokeMonitor)” is funded by European Regional Development Fund according to the 2014-2020 Operational Programme for the European Union Funds’ Investments under measure No. 01.2.1-LVPA-K-823 “Smartlnvest LT+”.