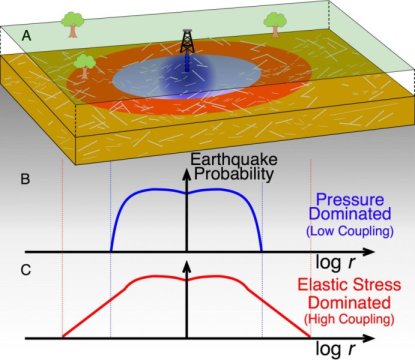 A study of earthquakes induced by injecting fluids deep underground has revealed surprising patterns, suggesting that current recommendations for hydraulic fracturing, wastewater disposal, and geothermal wells may need to be revised.

Researchers at UC Santa Cruz compiled and analyzed data from around the world for earthquakes clearly associated with injection wells. They found that a single injection well can cause earthquakes at distances more than 6 miles (10 kilometers) from the well. They also found that, in general, injecting fluids into sedimentary rock can cause larger, more distant earthquakes than injecting into the underlying basement rock.

“This is problematic, since the current advice is to preferentially inject into the sedimentary sequence as a theoretically safer alternative to the basement rock,” said Emily Brodsky, professor of Earth and planetary sciences at UC Santa Cruz.

Postdoctoral researcher Thomas Goebel said the key issue is the spatial footprint of induced seismicity around the injection well. “It’s not that the basement rock is safe, because there is still the possibility of encountering a fault in the basement rock that can cause a large earthquake, but the probability is reduced because the spatial footprint is smaller,” he said.

In a paper published August 31 in Science, Goebel and Brodsky described two distinct patterns of induced seismicity, which they associated with different physical mechanisms acting in basement rock and sedimentary rock. In the first pattern, associated with injection into basement rock, earthquakes tend to occur in a compact cluster around the well, with a steep decline in earthquakes farther from the well. In the other pattern, associated with sedimentary rock, induced earthquakes decline gradually with distance from the well and occur at much greater distances.

The physical mechanism by which injection wells induce earthquakes was thought to be a direct result of increased fluid pressure in the pores of the rock, causing faults to slip more easily. This mechanism can account for the spatial pattern of seismicity seen with injection into basement rock, Goebel said. But the pattern seen with injection into sedimentary rock suggests a different mechanism resulting from efficient “poroelastic coupling,” which controls the ability of the rock to transmit fluid stresses into the solid rock matrix.

“When you inject water into the ground, it pushes on the surrounding rock and creates elastic stress in the rock, which can put pressure on faults at a distance without putting water into those faults. So if poroelasticity is dominant, you end up with a larger footprint because it’s loading neighboring faults beyond the area of increased pore pressure,” Brodsky said.

According to Goebel, the crystalline basement rock is stiffer and has lower porosity than sedimentary rock. “Therefore, the increase in pore pressure is limited to isolated pockets around the well, and the coupling of that with the overall stress field is low,” he said.

Goebel said their findings help explain the extent of induced seismicity in regions such as Oklahoma where there are many injection sites in oil and gas fields. Oklahoma has seen a dramatic surge in earthquakes since 2010, to the extent that there are now more earthquakes each year in Oklahoma than in California. Goebel and Brodsky did not include sites in Oklahoma in their study, however, because there are so many injection wells they couldn’t isolate the effects of individual wells.

“In Oklahoma, they are injecting into the high-porosity sedimentary unit above the basement, but these elastic stresses can be transmitted over a large distance, so you could activate a large basement fault at a distance of 10 kilometers,” Goebel said. “That may be what we’re seeing in places like Oklahoma.”