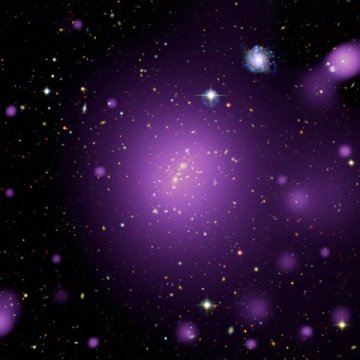 Recent observations create a puzzle for astrophysicists: since the big bang, fewer galaxy clusters have formed over time than was actually expected. Physicists from the university of Bonn have now confirmed this phenomenon. For the next three years, the researchers will analyze their data in even greater detail. This will put them in a position to confirm whether the theories considered valid today need to be reworked. The study is part of a series of 20 publications which appear in the journal Astronomy and Astrophysics.

Nearly 13.8 billion years ago, the big bang marked the beginning of our universe. It created space and time, but also all the matter of which our universe consists today. From then on, space expanded at a terrifying rate and so did the diffuse fog in which the matter was nearly evenly distributed.

But not completely: at some places the fog was a little bit denser than in others. As a result, these regions exerted a slightly stronger gravitational pull and slowly attracted material from their surroundings. Over time, matter concentrated more and more within these condensation points. At the same time, the space between them gradually became emptier. Over 13 billion years, this resulted in the formation of a sponge-like structure: big “holes” devoid of matter, separated by small areas within which thousands of galaxies agglomerate — the galaxy clusters.

The standard model of cosmology describes this history of the universe, from the first seconds after the big bang to the current day. The beauty of it: the model manages to explain, with only six parameters, everything we know today about the birth and evolution of the Universe. Nonetheless, the model may now have reached its limits. “New observational evidences point to the fact that the matter is distributed today in a different way than the theory predicts,” explains Dr. Florian Pacaud from the Argelander-Institut für Astronomie of the University of Bonn.

It all started with the measurements of the Planck satellite, which was launched by the European Space Agency (ESA) to measure the cosmic background radiation. This radiation is, to some extent, an afterglow of the big bang. It conveys crucial information on the matter distribution in the early universe; showing the distribution as it was only 380.000 years after the big bang.

According to the Planck measurements, this initial distribution was such that, over cosmic time, more galaxy clusters should have formed than we observe today. “We have measured with an X-ray satellite the number of galaxy clusters at different distances from ourselves,” explains Dr. Pacaud. The idea behind it: the light from remote galaxy clusters has traveled for billions of years before reaching us, and so we observe them today as they were when the universe was still young. Nearby clusters, on the contrary, are observed as they appeared much more recently.

“Our measurements confirm that the clusters formed too slowly,” said Dr. Pacaud. “We have estimated to which extent this result conflicts with the basic predictions of the standard model.” While there is a large discrepancy between the measurements and predictions, the statistical uncertainty in the present study is not yet tight enough to really put into question the theory. However, the researchers expect to obtain substantially more constraining results from the same project within the next three years. This will finally reveal whether the standard model needs to be revised.

The dark energy — a constant?

The study also supplies a glimpse into the nature of the dark energy. This mysterious constituent of the Universe acts as a kind of interstellar baking powder which cause the cosmic expansion to accelerate. The “amount” of dark energy — the cosmological constant — should have stayed the same since the big bang; or so assumes the standard model of cosmology. Many observations seem to point in this direction. “Our measurement also supports this thesis,” explains Dr. Pacaud. “But here again we shall obtain more precise results in a near future.”

The study is a part of a large-scale project with the appropriate name of ‘XXL Survey’, in which more than 100 scientists all around the globe cooperate. The 20 new publications from the collaboration, gathered in a special issue of Astronomy & Astrophysics (https://www.aanda.org/component/toc/?task=topic&id=927), only provide a taste of the project’s full power. The current analysis is based on a sample of 365 clusters, from which (so far) only 200 are used for the statistical analyses. By the end of the project — planed for 2020 — this database will double to some 400 to 500 clusters. Details can be found under http://irfu.cea.fr/xxl. An ESA press release associated with the 20 publications can also be found on the net: http://sci.esa.int/xmm-newton/60686.