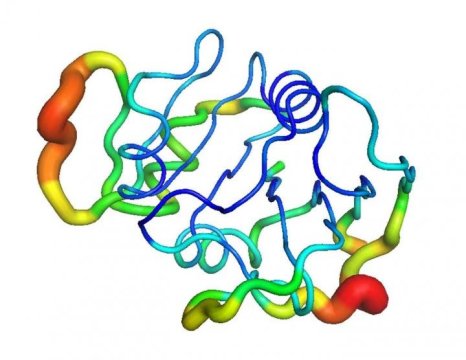 In the cells of every living organism — humans, birds, bees, roses and even bacteria — proteins vibrate with microscopic motions that help them perform vital tasks ranging from cell repair to photosynthesis.

These life-giving tremors are the topic of a study published on March 4 in Nature Communications.

A team led by University at Buffalo physicist Andrea Markelz reports that it has developed a method for rapidly measuring proteins’ unique vibrations.

The advance could open new possibilities in biological research, such as studying the microscopic motions of proteins more efficiently, or leveraging vibrational patterns as “fingerprints” to quickly determine whether specific proteins are present in a laboratory sample.

Scientists could also use the new technique to swiftly assess whether pharmaceuticals designed to inhibit a protein’s vibrations are working. This would require comparing the vibrational signatures of proteins before and after the application of inhibitors.

“Proteins are elegant and robust nanomachines that nature has developed,” says Markelz, PhD, a professor of physics in the UB College of Arts and Sciences. “We know nature uses molecular motions to optimize these machines. By learning the underlying principles of this optimization, we can develop new biotechnology for medicine, energy harvesting and even electronics.”

Katherine A. Niessen, PhD, a UB researcher who is now a development scientist at Corning, is first author of the paper, which includes contributions from scientists in the UB Department of Physics, the UB Department of Structural Biology in the Jacobs School of Medicine and Biomedical Sciences at UB, the Hauptman-Woodward Medical Research Institute, the National Heart, Lung, and Blood Institute and the University of Wisconsin-Milwaukee. The work was funded by the National Science Foundation and U.S. Department of Energy.

Markelz is a leading expert on the study of protein vibrations. These movements enable proteins to change shape quickly so they can readily bind to other proteins — a process that’s critical to normal biological function.

Several years ago, Markelz’ lab developed a technique called anisotropic terahertz microscopy (ATM) to observe protein vibrations in detail, including the energy and direction of movements.

In ATM, researchers shine terahertz light on a molecule. Then, they measure the frequencies of light the molecule absorbs. This provides insight into the molecules’ motion because molecules vibrate at the same frequency as the light they soak up.

The new study in Nature Communications reports that Markelz’ team has improved upon ATM by overcoming one of the method’s limitations: The need to painstakingly rotate and re-center protein samples several times in a microscope to gather enough useful data.

Now, “instead of rotating the protein sample, we rotate the polarization of the light we shine on the sample,” Markelz says. With this adjustment, it takes just 4 hours to make useful measurements — six times faster than before. The new technique also generates more detailed data.

Using the new approach, Markelz and colleagues measured the vibrations of four different proteins, generating a recognizable vibrational “fingerprint” for each that consisted of the molecule’s unique light absorption pattern.

The proteins studied were chicken egg-white lysozyme (a well-researched protein in the field), photoactive yellow proteins (thought to help protect certain photosynthesizing bacteria from ultraviolet light), dihydrofolate reductase (a drug target for antibiotics and cancer), and RNA G-quadruplexes (thought to be involved in vital cellular functions such as gene expression).