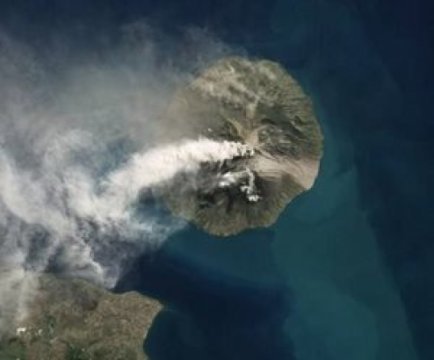 A new analysis has revealed that advanced satellite-based instrument capabilities are needed for global monitoring of microscopic particles, or aerosols, in the stratospheric layer of the atmosphere. Aerosols in the stratosphere — located above approximately 12 kilometers — increase drastically after a volcanic eruption, leading to changes in the Earth’s climate and providing a critical opportunity to test scientific models designed to predict short- and long-term climate variations.

Researchers from NASA Goddard Institute for Space Studies in New York and the National Academy of Sciences in Kyiv, Ukraine, report the new findings in The Optical Society (OSA) journal Optics Express.

When a volcano erupts, large amounts of ash and sulfuric-acid particles can blanket the entire planet, blocking much of the sunlight and temporarily causing global cooling. Scientists are now exploring whether this blanketing effect could be used to counteract global warming by injecting human-made aerosols in the stratosphere. Such geoengineering projects would also require a way to monitor the amount and size of artificial particulates in the stratosphere and the resulting climate effect.

“The global nature of natural and human-made stratospheric aerosols means that a specialized Earth-orbiting instrument is necessary to obtain comprehensive information on their properties and distribution,” said Janna Dlugach, a member of the research team from the Ukraine’s National Academy of Sciences. “This information is critical for testing climate models and for monitoring climate effects from potential geoengineering projects and major volcanic eruptions, which can affect the livelihood of the entire population.”

Over the next decade NASA plans to carry out a specialized mission to monitor aerosols and clouds on Earth. This mission would include an instrument that measures not only the brightness of sunlight reflected by the atmosphere and Earth’s surface but also the light’s polarization, which carries rich information about the size, composition and amount of aerosol particles.

“The technical characteristics of this future polarimeter are currently the subject of active debate among the scientific community,” said Michael Mishchenko, a member of the research team from NASA. “Our paper brings into this discussion the necessity of monitoring not just aerosols in the lower atmosphere, but also stratospheric aerosols that could become a major part of the climate system in the case of a major volcanic eruption or the implementation of a massive geoengineering program.”

Measurements of reflected sunlight by orbital instruments are usually dominated by bright water clouds, the land surface and aerosols found in the troposphere — the atmospheric layer closest to the ground. “This is not problematic when stratospheric aerosols are minimal and thus unimportant relative to tropospheric aerosols,” explained Dlugach. “However, it becomes essential to separate out the light coming from stratospheric aerosols in the case of volcanic eruptions or geoengineering activities.”

In the new study, the researchers argue that any future aerosol-monitoring orbital instrument should provide measurements within a narrow spectral channel centered at 1.378 micrometers. “At this wavelength the water vapor in the troposphere can almost completely absorb the sunlight scattered by clouds, terrestrial surfaces and tropospheric aerosols,” said Mishchenko. “This enables us to infer the properties of stratospheric aerosols separately from those of tropospheric aerosols.”

“We found that measuring the brightness of light alone does not allow the inference of stratospheric aerosols,” said Dlugach. “Our analysis suggests that future aerosol-monitoring space mission should include an instrument that can obtain precise polarization measurements of a terrestrial scene from multiple angles at the 1.378-micrometer wavelength.”

The strong water-vapor absorption channel is necessary to cancel out light coming from the lower atmosphere and surface while precise polarization measurements from multiple angles yield detailed information about stratospheric aerosols.

Next, the researchers plan to analyze more challenging observation conditions that would put additional requirements on the instrument design. They also want to determine whether combining polarimetric and lidar observations from the same orbital platform would be beneficial for certain conditions.