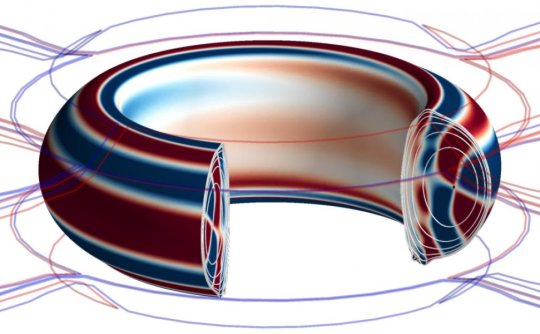 Fusion, the power that drives the sun and stars, produces massive amounts of energy. Scientists here on Earth seek to replicate this process, which merges light elements in the form of hot, charged plasma composed of free electrons and atomic nuclei, to create a virtually inexhaustible supply of power to generate electricity in what may be called a “star in a jar.”

A long-time puzzle in the effort to capture the power of fusion on Earth is how to lessen or eliminate a common instability that occurs in the plasma called edge localized modes (ELMs). Just as the sun releases enormous bursts of energy in the form of solar flares, so flare-like bursts of ELMs can slam into the walls of doughnut-shaped tokamaks that house fusion reactions, potentially damaging the walls of the reactor.

To control these bursts, scientists disturb the plasma with small magnetic ripples called resonant magnetic perturbations (RMPs) that distort the smooth, doughnut shape of the plasma — releasing excess pressure that lessens or prevents ELMs from occurring. The hard part is producing just the right amount of this 3D distortion to eliminate the ELMs without triggering other instabilities and releasing too much energy that, in the worst case, can lead to a major disruption that terminates the plasma.

Making the task exceptionally difficult is the fact that a virtually limitless number of magnetic distortions can be applied to the plasma, causing finding precisely the right kind of distortion to be an extraordinary challenge. But no longer.

Physicist Jong-Kyu Park of the U.S. Department of Energy’s (DOE) Princeton Plasma Physics Laboratory (PPPL), working with a team of collaborators from the United States and the National Fusion Research Institute (NFRI) in Korea, have successfully predicted the entire set of beneficial 3D distortions for controlling ELMs without creating more problems. Researchers validated these predictions on the Korean Superconducting Tokamak Advanced Research (KSTAR) facility, one of the world’s most advanced superconducting tokamaks, located in Daejeon, South Korea.

KSTAR was ideal for testing the predictions because of its advanced magnet controls for generating precise distortions in the near-perfect, doughnut-shaped symmetry of the plasma. Identifying the most beneficial distortions, which amount to less than one percent of all the possible distortions that could be produced inside KSTAR, would have been virtually impossible without the predictive model developed by the research team.

The result was a precedent-setting achievement. “We show for the first time the full 3D field operating window in a tokamak to suppress ELMs without stirring up core instabilities or excessively degrading confinement,” said Park, whose paper — written with 14 coauthors from the United States and South Korea — is published in Nature Physics. “For a long time we thought it would be too computationally difficult to identify all beneficial symmetry-breaking fields, but our work now demonstrates a simple procedure to identify the set of all such configurations.”

Researchers reduced the complexity of the calculations when they realized that the number of ways the plasma can distort is actually far fewer than the range of possible 3D fields that can be applied to the plasma. By working backwards, from distortions to 3D fields, the authors calculated the most effective fields for eliminating ELMs. The KSTAR experiments confirmed the predictions with remarkable accuracy.

The findings on KSTAR provide new confidence in the ability to predict optimal 3D fields for ITER, the international tokamak under construction in France, which plans to employ special magnets to produce 3D distortions to control ELMs. Such control will be vital for ITER, whose goal is to produce 10 times more energy than it will take to heat the plasma. Said authors of the paper, “the method and principle adopted in this study can substantially improve the efficiency and fidelity of the complicated 3D optimizing process in tokamaks.”