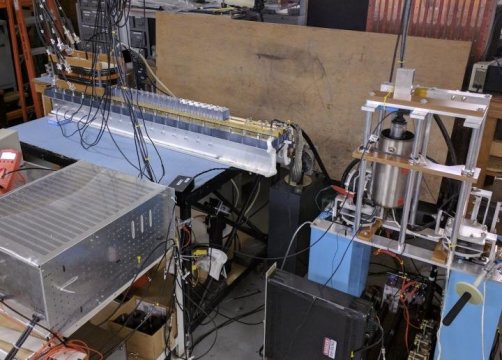 Scientists seeking to capture and control on Earth fusion energy, the process that powers the sun and stars, face the risk of disruptions — sudden events that can halt fusion reactions and damage facilities called tokamaks that house them. Researchers at the U.S. Department of Energy’s (DOE) Princeton Plasma Physics Laboratory (PPPL), and the University of Washington have developed a novel prototype for rapidly controlling disruptions before they can take full effect.

The device, called an “electromagnetic particle injector” (EPI), is a type of railgun that fires a high-velocity projectile from a pair of electrified rails into a plasma on the verge of disruption. The projectile, called a “sabot,” releases a payload of material into the center of the plasma that radiates, or spreads out, the energy stored in the plasma, reducing its impact on the interior of the tokamak.

This process may prove faster and may allow payloads to penetrate more deeply into the plasma than today’s most developed techniques. Current systems release pressurized gas or gas-propelled shattered pellets using a gas valve into the plasma, but with velocity limited by the mass of the gas particles. “The primary advantage of the EPI concept over gas-propelled systems is its potential to meet short-warning time scales,” said Roger Raman, a University of Washington physicist on long-term assignment to PPPL and lead author of a Nuclear Fusion paper that describes the new system.

The risk of disruptions is particularly great for ITER, the large international tokamak under construction in France to demonstrate the feasibility of fusion power. ITER’s dense, high-power discharges of plasma, the state of matter that fuels fusion reactions, will make it difficult for current gas-propelled methods of mitigation to penetrate deeply enough into the highly energetic ITER plasma to take good effect.

On ITER, mitigation is desired in less than 20 milliseconds, or thousands of a second, from the warning of a disruption, with 10 milliseconds as ideal. Tests of the EPI prototype show that it can deliver a payload of correctly sized particles in fewer than 10 milliseconds, compared with 30 milliseconds for gas-propelled systems.

The prototype, built at the University of Washington, harkens back to a fusion reactor fueling system that Raman worked on years ago. That system injected plasmoids, football shaped plasmas with their own magnetic fields, that were injected into a fusion plasma at high velocity. Raman adapted some features of the system to allow much more mass to be injected in a simpler configuration, as would be required for a long standby mode of operation, to develop the EPI.

The prototype houses the sabot between two electrically conducting rails located some 2-to-3 centimeters apart and connected to a capacitor bank that holds an electrical charge. Discharging the bank produces electromagnetic forces that accelerate the sabot, enabling release of the payload in just 2 milliseconds. The material, consisting of light-metal granules or pellets, would radiate the energy of a disruption from the center of the plasma to the edge, spreading out the energy and weakening its impact on the tokamak walls.

Further development of the EPI system has been proposed to be conducted at PPPL. Plans call for construction of second-and third-generation prototypes with increasingly strong magnetic fields over a three-year period, followed by deployment on a tokamak in the fourth year. Results so far, as reported in Nuclear Fusion, provide a degree of confidence that an effective EPI system can be developed to mitigate powerful disruptions on ITER.

Joining Raman in this research publication are Jonathan Menard and Masa Ono of PPPL, and Wei-Siang Lay and Thomas Jarboe of the University of Washington. Support for this work comes from the DOE Office of Science.