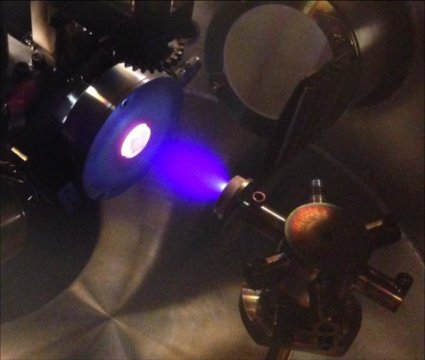 Using ferroelectricity instead of magnetism in computer memory saves energy. If ferroelectric bits were nanosized, this would also save space. But conventional wisdom dictates that ferroelectric properties disappear when the bits are made smaller. Reports that hafnium oxide can be used to make a nanoscale ferroelectric have not yet convinced the field. University of Groningen (UG) physicists have now gathered evidence that could persuade the skeptics. It was published in Nature Materials on 22 October.

Ferroelectric materials have a spontaneous dipole moment which can point up or down. This means that they can be used to store information, just like magnetic bits on a hard disk. The advantage of ferroelectric bits is that they can be written at a low voltage and power. Magnetic bits require large currents to create a magnetic field for switching, and thus more power. The disadvantage of ferroelectrics is that the aligned dipoles are only stable in fairly large groups, so if you make the crystals smaller, the dipole moment eventually disappears.

‘Reducing the size of ferroelectric materials has been a research topic for more than 20 years’, says UG Professor of Functional Nanomaterials, Beatriz Noheda. Some eight years ago, a breakthrough was announced by the Nanoelectronic Materials Laboratory in Dresden, Germany. They claimed that hafnium oxide thin films were ferroelectric when thinner than ten nanometres and that thicker films actually lost their ferroelectric properties. Noheda: ‘This went against everything we knew, so most scientists were skeptical, including me.’ Some of the skepticism was because the ferroelectric hafnium samples used in these studies were polycrystalline and showed multiple phases, obscuring any clear fundamental understanding of such an unconventional phenomenon.

Noheda and her group decided to investigate. They wanted to study these crystals by growing clean (single-phase) films on a substrate. Using X-ray scattering and high-resolution electron microscopy techniques, they observed that very thin films (under ten nanometres) grow in an entirely unexpected and previously unknown polar structure, which is necessary for ferroelectricity. Combining these observations with meticulous transport measurements, they confirmed that the material was indeed ferroelectric. ‘In the substrate that we used, the atoms were a little bit closer than those in hafnium oxide, so the hafnium crystals would be a little strained’, Noheda explains.

To their surprise, they noticed that the crystal structure changed when the layers exceeded ten nanometres, thus reproducing the results of the Dresden lab. Noheda: ‘We used a totally different method, but we reached similar conclusions. This confirmed that ferroelectricity in nanosized hafnium oxide crystals is indeed real and unconventional. And that begged the question: why does this happen?’

The common denominator in both studies was size. Small crystals became ferroelectric, whereas larger crystals lost this property. This led the scientists to study the phase diagrams of hafnium oxide. At a very small size, particles have a very large surface energy, creating pressures of up to 5 gigapascals in the crystal. The phase diagrams show a different crystal arrangement at such a pressure. ‘This pressure, along with the substrate-imposed strain, induces a polar phase, which is in line with the observation that these crystals are ferroelectric’, concludes Noheda.

One more important finding is that, in contrast to the thin films in Dresden, the new crystals do not need a ‘wake-up’ cycle to become ferroelectric. Noheda: ‘The previously studied thin films only became ferroelectric after going through a number of switching cycles. This increased the suspicion that ferroelectricity was some sort of artefact. We now believe that the wake-up cycles were necessary to align the dipoles in “unclean” samples grown via other techniques. In our material, the alignment is already present in the crystals.’

In Noheda’s opinion, the results are conclusive: hafnium oxide is ferroelectric at the nanoscale. This means that very small bits can be constructed from this material, with the added advantage that they switch at low voltage. Furthermore, the particular substrate used in this study is magnetic, and this combination of magnetic and ferroelectric bits brings an extra degree of freedom, allowing each bit to store double the information. Now that the mechanism of nanosized ferroelectricity is clear, it seems likely that other simple oxides could have similar properties. Noheda expects that together, this will spark a lot of new research.