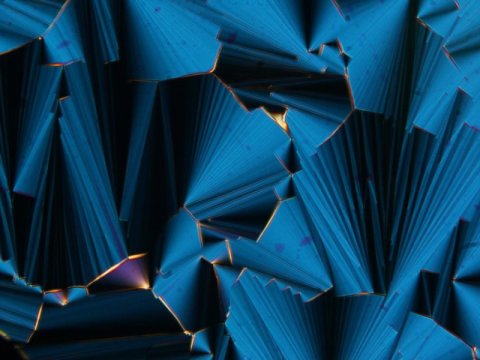 The display screens of modern televisions, cell phones and computer monitors rely on liquid crystals — materials that flow like liquids but have molecules oriented in crystal-like structures. However, liquid crystals may have played a far more ancient role: helping to assemble Earth’s first biomolecules. Researchers reporting in ACS Nano have found that short RNA molecules can form liquid crystals that encourage growth into longer chains.

Scientists have speculated that life on Earth originated in an “RNA world,” where RNA fulfilled the dual role of carrying genetic information and conducting metabolism before the dawn of DNA or proteins. Indeed, researchers have discovered catalytic RNA strands, or “ribozymes,” in modern genomes. Known ribozymes are about 16-150 nucleotides in length, so how did these sequences assemble in a primordial world without existing ribozymes or proteins? Tommaso Bellini and colleagues wondered if liquid crystals could help guide short RNA precursors to form longer strands.

To find out, the researchers explored different scenarios under which short RNAs could self-assemble. They found that at high concentrations, short RNA sequences (either 6 or 12 nucleotides long) spontaneously ordered into liquid crystal phases. Liquid crystals formed even more readily when the researchers added magnesium ions, which stabilized the crystals, or polyethylene glycol, which sequestered RNA into highly concentrated microdomains. Once the RNAs were held together in liquid crystals, a chemical activator could efficiently join their ends into much longer strands. This arrangement also helped avoid the formation of circular RNAs that could not be lengthened further. The researchers point out that polyethylene glycol and the chemical activator would not be found under primordial conditions, but they say that other molecular species could have played similar, if less efficient, roles.

The authors acknowledge funding from the National Science Foundation Division of Materials Research and the Invernizzi Foundation.