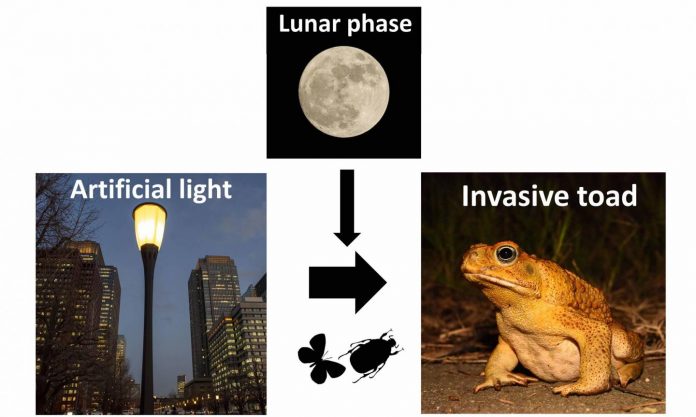 Light pollution is increasingly being recognized as yet another of humanity’s many impacts on the rest of the natural world. Artificial light at night, or “ALAN” to use the researchers’ name for the phenomenon, can alter foraging behavior, migration patterns, mortality rates and even the very physical structure of animals.

But there has been little research into the effect of ALAN on invasive species–species that are not indigenous, or native, to an area–which can sometimes cause significant economic and ecological damage.

However, as anyone who has a porch light can see, nocturnal insects such as moths, flies and beetles are attracted to this artificial light. These invertebrates are food sources for nocturnal predators such as bats, birds and frogs–including what is perhaps the most iconic invasive species of all time, the cane toad.

Cane toads feed on nocturnal insects, and Assistant Professor Hirotaka Komine with Tokyo University of Agriculture and Technology (TUAT) along with their colleagues from Australia’s James Cook University wanted to find out whether the artificially large food source that ALAN makes available in a particular location had any impact on the cane toad.

They published their findings on April 16 in Scientific Reports.

They set up six outdoor enclosures, each with an artificial light attached, in different rural areas around Townsville, Queensland. They then placed cane toads that they had locally captured in the enclosures just before sunset. After the toads had feasted overnight on whatever invertebrate delectable treats had been attracted to the ALAN, the toads were euthanized and dissected to measure the contents of their bellies.

The researchers varied the amount of light, and controlled for the affects of rainfall, wind speed, and temperature, which also have an impact on the availability of sources of food. They found that when the lights were on, the percentage of flying insects that the toads consumed increased significantly.

But the toads did not eat as many flying bugs when the moon was bright. The same reduction in bug consumption happened in those areas that were closer to urban areas that already suffered from ample ambient ALAN. In both cases, the extra light diluted the impact of the lamps the researchers had set up.

“This tells us that in order to control the growth of this invasive species,” said conservation biologist Hirotaka Komine. “More careful management of artificial light in rural areas such as that from highway lampposts or scattered buildings, could go a long way in reducing the food resources available.”

The researchers added that light management approaches should also consider the lunar cycle, such as reducing light use where possible during dark lunar phases.

About Tokyo University of Agriculture and Technology (TUAT):

TUAT is a distinguished university in Japan dedicated to science and technology. TUAT focuses on agriculture and engineering that form the foundation of industry, and promotes education and research fields that incorporate them. Boasting a history of over 140 years since our founding in 1874, TUAT continues to boldly take on new challenges and steadily promote fields. With high ethics, TUAT fulfills social responsibility in the capacity of transmitting science and technology information towards the construction of a sustainable society where both human beings and nature can thrive in a symbiotic relationship. For more information, please visit http://www.tuat.ac.jp/en/.