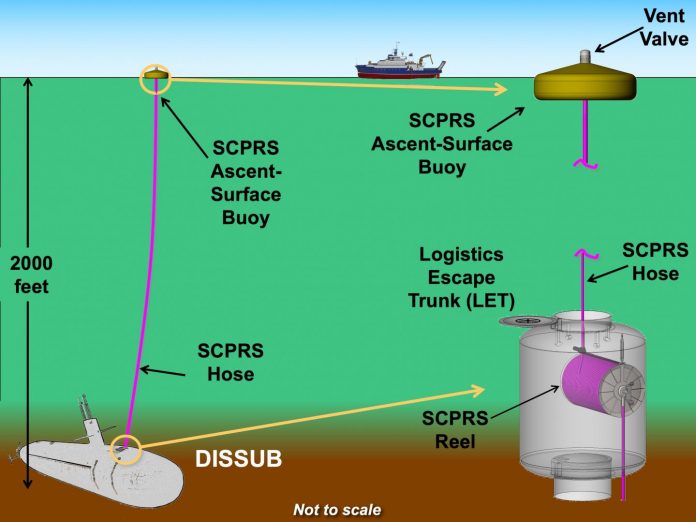 IRWINDALE, CA – Global Aerospace Corporation (GAC) announced today that it has patented (US 10,683,071) a passive system to decompress the air within a crew compartment of a disabled submarine (DISSUB) thousands of feet below the surface of the ocean. The patent, published June 16, 2020, addresses possible DISSUB scenarios such as the one described below:

DISSUB Scenario. Onboard a US Navy submarine in a remote corner of the world something is seriously wrong. The aft engine compartment has partially flooded, trapping 40 members of the crew, and all but emergency power is offline. The submarine sits on the bottom in 2,000 feet of water where the water pressure is about 60-times surface atmospheric pressure. A Submarine Emergency Position Indicating Radio Beacon (SEPIRB) buoy that communicates with satellites has been launched to the surface, but it could take several days before ships with rescuers arrive.

The pressure in the flooded compartment is twice sea level and the air is so foul that the Built-In Breathing System (BIBS) is being used and adding to the compartment pressure every minute. While the flooding has been halted, breathing air at high pressure for a sustained period of time can significantly increase the likelihood of crewmember incapacitation or injury. Furthermore, without intervention the compartment could be at 5-times sea level pressure after four days, well before rescue. Couple this situation with the fact that current Navy rescue vehicles require a compartment pressure no more than 5-time sea level pressure, makes rescue a very significant, if not impossible, challenge after just four days.

Mr. Nock, one of the device’s inventors, stated, “a DISSUB on the ocean bottom could have crew compartments that have internal pressures several times sea level and breathing this air can reduce the chances of crew survival because of nitrogen narcosis, oxygen toxicity or possible decompression sickness caused by rapid decompression during rescue.”

However, with a simple and passive Submarine Compartment Pressure Relief System (SCPRS – pronounced skippers) already stored or installed onboard, a crew could reduce or stabilize the compartment air pressure without external assistance or submarine energy sources, and significantly increase their own chances of a safe rescue. SCPRS could be stored onboard current submarines or installed permanently on the external hull of retrofitted on new submarines. The associated image depicts a portable SCPRS mounted by a crew in a DISSUB Logistics Escape Trunk.

The Problem. As described above, there is a high probability that a distressed submarine (DISSUB) on the ocean bottom could have compartments with internal pressures of greater than 1 ata (atmosphere absolute). Compartment pressurization can result from flooding, which compresses the air into a smaller volume; venting from high-pressure air banks due to damaged plumbing, or crew use of emergency breathing apparatus. Breathing air at high pressures can significantly reduce the chances of crewmembers survival due to 1) increased solution of nitrogen in nerve membranes (nitrogen narcosis) that can cause impairment or incapacitation, similar to drugs or alcohol; 2) increased concentration of oxygen in the body that can be toxic to the central nervous system, lungs and eyes; and 3) decompression sickness caused by rapid decompression upon rescue that can cause dissolved gases in the body to come out of solution forming bubbles that can cause severe pain, paralysis or death. The pressure of 5 ata, a possible compartment pressure, corresponds to a depth of only 132 feet. Since a rescue-capable DISSUB can be located as deep as 2,000 feet below the surface at pressures over 60 ata, decompression is a major challenge and no system currently exists that meets the US Navy’s requirements. In addition, the US Navy’s Pressurized Rescue Module (PRM) is not capable of transporting rescued personnel under pressures over 5 ata from the DISSUB to a surface ship. Moreover, the US Navy cannot rescue survivors from a DISSUB with an internal pressure of 5 ata at a depth less than about 400 ft because the hydrostatic compressive force from the difference between the exterior sea pressure and the interior air pressure that holds the PRM in place is insufficient.

The Solution. To help combat this problem, the SCPRS: 1) creates a physical atmospheric connection between the pressurized DISSUB compartment(s) and the ocean surface, 2) enables venting and equalization of compartment overpressure directly to the sea surface atmosphere, 3) accommodates a wide range of depths from hundreds to thousands of feet, and 4) is a solution that does not require shipboard power or excessive crew exertion.

The Innovation. SCPRS is a simple and passive system that can be stored, or pre-installed, onboard and can be used by a submarine crew. SCPRS works by reducing the compartment air pressure by simple venting and pressure equalization to the surface atmosphere without external assistance or submarine energy sources. SCPRS can significantly increase the chances of a safe rescue. This innovation includes the following features:

– A portable system within any lockout or escape trunk or a built-in system external to the pressure hull.

– Automatically released buoyancy device that rises while unreeling the hose taking it to the surface.

– Check valves and other configuration features that prevent seawater from entering the hose at the surface, which could restrict pressurized air from venting or allow water to enter a crew compartment

– Operates in combined list and trim orientations of at least 30°.

The US Patent #10,683,071 issued to Global Aerospace Corporation was published on June 16, 2020 as a Submerged Compartment Fluid Transfer System by the United States Patent and Trademark Office. Inventors are Kim M. Aaron and Kerry T. Nock.