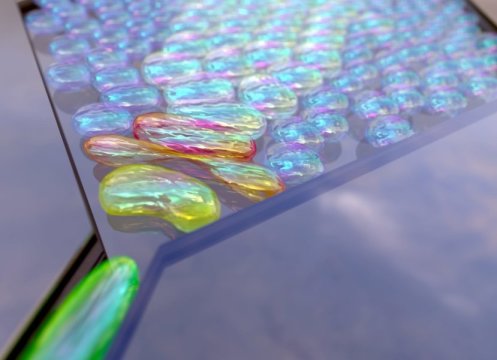 It’s easy to make bubbles, but try making hundreds of thousands of them a minute — all the same size.

Rice University engineers can do that and much more. Rice chemical and biomolecular engineer Sibani Lisa Biswal and lead author and graduate student Daniel Vecchiolla have created a microfluidic device that pumps out more than 15,000 microscopic bubbles a second and can be tuned to make them in one, two or three distinct sizes.

The work featured on the cover of the Royal Society of Chemistry journal Soft Matter enables customizable, “wet” foams in small amounts for applications that include chemical and biological studies.

The best part is that the bubbles themselves do the hard part.

A movie that demonstrates the mechanism shows elongated bubbles shooting through a tube into an input channel. Each arrow-like bubble moves with enough force to split the bubble ahead of it, but the arrow remains intact. It takes its place between the new “daughter” bubbles and becomes a “wall” that holds the next bubble in place for splitting. In that way, only every other bubble entering the expansion splits from the inter-bubble forces.

Vecchiolla described the process as “metronomic,” the tick being a bubble splitting and the tock a bubble that remains whole.

When the input is centered and all the other parameters — the type of liquid, its viscosity, the flow rate and the width of the channel — are right, the device fills with large bubbles in the middle and two ranks of identical, smaller bubbles along the edges. When the input is offset, the stream produces bubbles in three sizes.

“There’s interest in using monodisperse bubbles for material applications and miniaturized reactors, so there’s been a lot of studies about the generation of uniformly sized gas bubbles,” Biswal said. “But there have been very few that looked at using neighboring bubbles to create these daughter bubbles. We’re able to generate well-ordered foam systems and control the size distribution.”

Recent alumna Vidya Giri helped create the microfluidic channels, which are about one-twentieth of an inch wide with a feeder channel of about 70 microns.

Biswal is an associate professor of chemical and biomolecular engineering and of materials science and nanoengineering. The National Science Foundation supported the research.