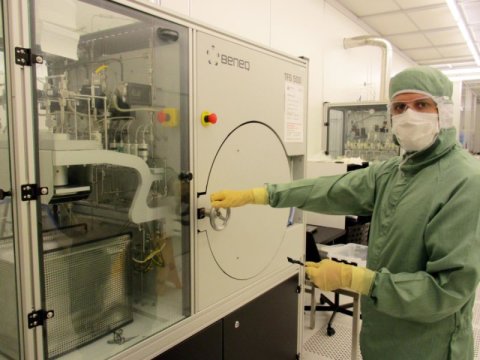 Light is a more energy efficient and faster way of transferring data than electricity. Until now, the rapid attenuation of light signals in microchips has prevented the use of light as a source of an information signal.

With international collaboration, researchers at Aalto University have now developed a nanosized amplifier to help light signals propagate through microchips. In their study published in Nature Communications, the researchers show that signal attenuation can be significantly reduced when data is transferred inside a microchip, for example, from one processor to another.

‘Photonics, or light transfer that is already widely used in internet connections, is increasingly being used by microcircuit systems because light is a more energy efficient and faster way of transferring data than electricity. The increase in information also requires an increase in performance. Boosting performance through electronic methods is getting to be very difficult, which is why we’re looking towards photonics for answers,’ says doctoral candidate John Rönn.

The researchers made their breakthrough with the help of a Finnish invention: the atomic layer deposition method. According to the team, the method is ideal for processing various kinds of microcircuits, as it plays an important role in manufacturing today’s microprocessors.

So far, the atomic layer deposition method has been used mainly in electronic applications. However, the newly released study indicates that possible applications also exist in photonics. In the development of photonics, new components must also ideally work with electricity — that is, in electronics.

‘Silicon is a key material in electronics, and that’s why it’s also included in our light amplifiers together with the amplification element erbium,’ Rönn says.

The study showed that a light signal can be potentially boosted in all kinds of structures and that the structure of a microchip is not limited to a specific type. The results indicate that atomic layer deposition is a promising method for developing microchip photonic processes.

‘Our international collaboration made a breakthrough with one component: a nanosized amplifier. The amplification that we got was very significant. But we’ll still need more components before light can completely replace electricity in data transfer systems. The first possible applications are in nanolasers, and in sending and amplifying data,’ says Professor Zhipei Sun.