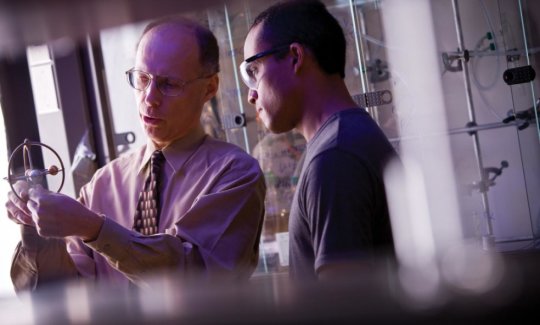 For decades, Texas A&M University chemist Dr. John A. Gladysz has been mixing metals and carbon to create novel molecules, from the world’s longest molecular wires to microscopic gyroscopes controllable by cage size, molecular access and even progress toward unidirectional rotation via external electrical field manipulation.

In a most recent accomplishment, Gladysz and his research group have made a new type of molecular rotor that shows promise for future development as a functional molecular machine capable of manipulating matter at atomic and subatomic levels and transforming multiple branches of chemistry, along with myriad related sectors and industries.

The Gladysz group used a method called olefin metathesis recognized with the 2005 Nobel Prize in Chemistry to synthesize a series of platinum complexes with macrocyclic ring ligands that can flip over the core platinum atom in a conformation change reminiscent of Double-Dutch rope jumping. The researchers overcame significant synthetic challenges to achieve unprecedented molecular motions, often centered on a core rotation that evokes a triple axel skating jump.

In addition to characterizing the new molecules using various physical methods, the researchers used computational methods available through the Laboratory for Molecular Simulation (LMS) as well as supercomputing and data-analysis technology via Texas A&M High Performance Research Computing to further understand the motions these molecules can undergo.

“Similar compounds have been reported before but with only one macrocyclic ring,” said Ehnbom, who in addition to Gladysz also works with Texas A&M theoretical chemist and LMS director Dr. Michael B. Hall.

“Ours have three rings and therefore can undergo a ‘triple-jump-rope’ mechanism, which is unprecedented,” Joshi added.

Molecular machines — tiny structures with controllable movements that can perform a variety of tasks when energy is added to the equation — made major headway and headlines as the subject of the 2016 Nobel Prize in Chemistry. As versatile as they are mighty, these devices potentially can be employed as molecular switches and motor-molecules and then applied to the fabrication of nanoelectronic devices, nanoelectromechanical systems (NEMS) and drug delivery systems with any number of potential applications in chemistry, materials science and engineering, industry and medicine.

“Scientists have pursued the synthesis of molecules with architectures that enable controlled movements for a very long time, and it is an increasingly active field of research, as evidenced by the 2016 Nobel Prize,” Gladysz said. “Using such molecules, it should be possible to design and develop functional molecular machines capable of manipulating matter at the atomic level, which would be revolutionary. We are still far from reaching this goal, but now, we are one step closer.”

Ehnbom notes that one important next step will be figuring out how to control the motion of their compounds, which at present is random, not unlike that of real-life engines and motors. The team plans to use state-of-the-art computational models to simulate such rotation, thereby gaining a better understanding of the factors that control it to further hone their design, from subsequent rotors to experiments. After all, the future — and feasible application — depends on it.

“If researchers ever succeed to synthesize functional molecular machines, the possibilities are endless and range from molecular-level transport, or delivery of medication within the body, to manipulation of microscopic structures, or synthesis of chemicals, to data processing and storage,” added Kharel, who just completed his Texas A&M Ph.D.

Materials provided by Texas A&M University. Note: Content may be edited for style and length.