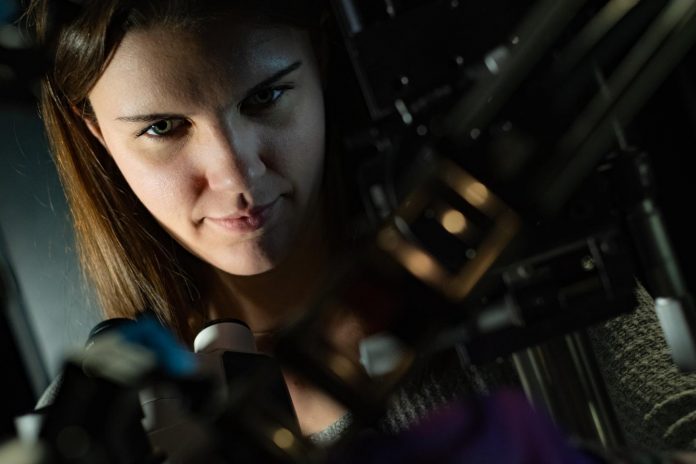 HOUSTON – (June 29, 2020) – A scientist might want to do cartwheels upon making a discovery, but this time the discovery itself relies on cartwheels.

Researchers at Rice University have discovered details about a novel type of polarized light-matter interaction with light that literally turns end over end as it propagates from a source. Their find could help study molecules like those in light-harvesting antennas anticipated to have unique sensitivity to the phenomenon.

The researchers observed the effect they call trochoidal dichroism in the light scattered by two coupled dipole-scatterers, in this case a pair of closely-spaced plasmonic metal nanorods, when they were excited by the cartwheeling light.

The light polarization the researchers used is fundamentally different from the linear polarization that makes sunglasses work and corkscrew-like circularly polarized light used in circular dichroism to study the conformation of proteins and other small molecules.

Instead of taking a helical form, the field of light is flat as it cartwheels — rotating either clockwise or anticlockwise — away from the source like a rolling hula hoop. This type of light polarization, called trochoidal polarization, has been observed previously, said Rice graduate student and lead author Lauren McCarthy, but nobody knew that plasmonic nanoparticles could be used to see how it rolled.

“Now we know how trochoidal polarizations relate to existing light-matter interactions,” she said. “There’s a difference between understanding the light and its physical properties and understanding light’s influence on matter. The differential interaction with matter, based on the material’s geometry, is the new piece here.”

The discovery by the Rice lab of chemist Stephan Link is detailed in the Proceedings of the National Academy of Sciences.

The researchers weren’t looking specifically for trochoidal dichroism. They were generating an evanescent field in a technique they developed to study chiral gold nanoparticles to see how spatially-confined, left- and right-handed circularly polarized light interacted with matter. Freely propagating circularly polarized light interactions are key to several technologies, including 3D glasses made of materials that discriminate between opposite light polarizations, but are not as well-understood when light is confined to small spaces at interfaces.

Instead of the circularly polarized light used before, the authors changed the incident light polarization used in order to generate an evanescent field with cartwheeling waves. The researchers found that the clockwise and anticlockwise trochoidal polarizations interacted differently with pairs of plasmonic nanorods oriented at 90? from each other. Specifically, the wavelengths of light the nanorod pairs scattered changed when the trochoidal polarization changed from clockwise to anticlockwise, which is a characteristic of dichroism.

“Trochoidal waves have been discussed, and different groups have probed their properties and applications,” McCarthy said. “However, as far as we know, no one’s observed that a material’s geometry can enable differential interactions with anticlockwise versus clockwise trochoidal waves.”

Molecules interact with light through their electric and magnetic dipoles. The researchers noted that molecules with electric and magnetic dipoles that are perpendicular to each other, as with the 90-degree nanoparticles, have charge motion that rotates in-plane when excited. Trochoidal dichroism could be used to determine the direction of this rotation, which would reveal molecular orientation.

“Having worked with polarized light interacting with plasmonic nanostructures for a long time now, the current discovery is certainly special in several ways,” Link said. “Finding a new form of polarized-light matter interaction is exciting by itself. Equally rewarding was the process of the discovery, though, as Lauren and my former student, Kyle Smith, pushed me to keep up with their results. At the end it was real team effort by all co-authors of which I am very proud.”

Co-authors of the paper are graduate student Seyyed Ali Hosseini Jebeli, alumni Smith and Xiang Lan; postdoctoral researcher Dr. Luca Bursi; Alessandro Alabastri, the Texas Instruments Assistant Research Professor at Rice; Wei-Shung Chang, an assistant professor of chemistry and biochemistry at the University of Massachusetts, Dartmouth, and Peter Nordlander, the Wiess Chair in Physics and Astronomy and a professor of electrical and computer engineering, and of materials science and nanoengineering at Rice. Link is a professor of chemistry and of electrical and computer engineering.

The Robert A. Welch Foundation and the National Science Foundation supported the research.

This news release can be found online at https://news.rice.edu/2020/06/29/cartwheeling-light-reveals-new-optical-phenomenon/

A model by Rice University scientists shows how two positively charged spheres attached to springs are attracted to the electric field of light. Due to the motion of the spheres, the spring system scatters light at different energies when irradiated with clockwise and anticlockwise trochoidal waves. (Credit: Link Research Group/Rice University)

Rice University graduate student Lauren McCarthy led an effort that discovered details about a novel type of polarized-light matter interaction with light that literally turns end over end as it propagates from a source. (Credit: Jeff Fitlow/Rice University)