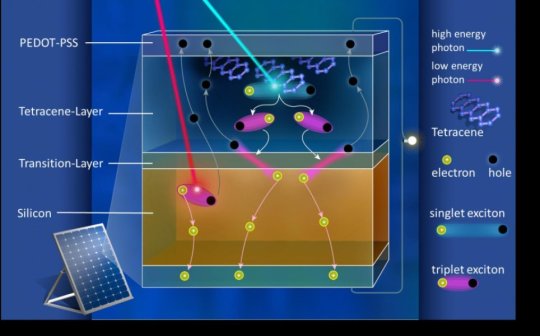 The efficiency of a solar cell is one of its most important parameters. It indicates what percentage of the solar energy radiated into the cell is converted into electrical energy. The theoretical limit for silicon solar cells is 29.3 percent due to physical material properties. In the journal Materials Horizons, researchers from Helmholtz-Zentrum Berlin (HZB) and international colleagues describe how this limit can be abolished. The trick: they incorporate layers of organic molecules into the solar cell. These layers utilise a quantum mechanical process known as singlet exciton fission to split certain energetic light (green and blue photons) in such a way that the electrical current of the solar cell can double in that energy range.

The principle of a solar cell is simple: per incident light particle (photon) a pair of charge carriers (exciton) consisting of a negative and a positive charge carrier (electron and hole) is generated. These two opposite charges can move freely in the semiconductor. When they reach the charge-selective electrical contacts, one only allows positive charges to pass through, the other only negative charges. A direct electrical current is therefore generated, which can be used by an external consumer.

The team around HZB researcher, Prof. Klaus Lips, gives now a solution to build the solar cell in such a way that certain high energy photons are used to generate two pairs of charge carrier simultaneously. The effect they used resides in some organic crystals and is known as “singlet exciton fission” (SF). In order for this multiplier effect to be possible, charge carrier pairs have to fulfill certain quantum physical conditions: all their spins have to be parallel meaning charge carrier pairs called triplet exciton.

These triplet excitons are quite durable and very strongly bound together. The challenge was to split apart them at an interface to silicon. This unbinds the positive and negative charge carriers, permitting them to contribute to the solar cell’s current.

In a pioneering experiment the researchers have shown the splitting to be possible. “With implementing this concept successfully, we can make a silicon solar cell with a maximum quantum efficiency of 200 percent (double the normal limit), and a theoretical efficiency limit of around 40 percent,” says Dr. Rowan MacQueen, an Australian researcher who joined the HZB team two years ago and is realizing the charge carrier multiplier solar cell at the HZB.

In the recently-reported work, the HZB researchers integrated a 100 nanometer thick layer of singlet fission-capable tetracene crystals into the surface of a silicon solar cell. Using spectroscopic investigations, triplet charge carrier pairs in the thin tetracene layer were detected, a signature of singlet fission. “The challenge was to separate the triplet pairs at the silicon interface without significantly disrupting the current flow of the silicon solar cell,” explains Klaus Lips, since a poorly conducting organic layer borders on the well conducting silicon layer, a situation that could greatly impede the current flow.

The splitting succeeds with an additionally introduced organic conductor called PEDOT:PSS meaning another organic layer is necessary. “The interfaces play a special role in this structure,” says Dr. MacQueen, which is why the researchers used X-ray light from the BESSY [email protected] synchrotron to study the interface properties. They then fabricated a series of working tetracene-silicon solar cells. A key finding was that the addition of the organic layer did not impede the electrical performance of the silicon cell, which is critical for producing an efficient device.

The electrical performance of the first silicon singlet fission solar cell showed that tetracene absorbs the blue-green portion of the light, while low-energy photons are absorbed by the silicon. Using a simulation, the researchers were able to estimate that currently about 5-10 percent of the triplet pairs generated in the tetracene layer could be added to the output power.

For Klaus Lips this is a great success but he is already considering follow-up experiments: “With this solar cell structure, we have shown that the approach works in principle, and delivered a workhorse design. And we already know what we have to do to increase the yield of separated triplet excitons to up to 200 percent.”