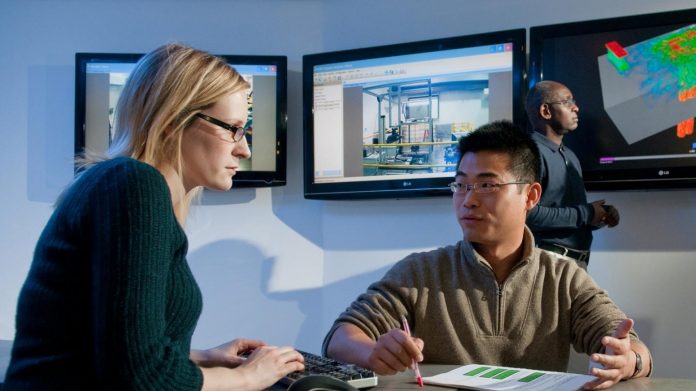 ARPA-E‘s GEMINA funding will allow Argonne’s nuclear scientists to partner with industry and develop tools for the advanced reactors of tomorrow.

When designing the next generation of nuclear power plants, the safest way to gauge new tools and technology is to test them on digital models first. Mimicking reactors, these digital twins can be used by companies to explore novel technologies and ways to lower costs or refine designs before breaking ground.

The U.S. Department of Energy’s (DOE) Argonne National Laboratory recently obtained $8 million from DOE‘s Advanced Research Projects Agency-Energy (ARPA-E) to research these possibilities. With this new funding, Argonne engineers will partner with companies to design digital twins and develop other tools and technology to run the advanced reactors of tomorrow.

The funding comes from ARPA-E‘s Generating Electricity Managed by Intelligent Nuclear Assets (GEMINA) program. Nuclear engineers at Argonne are involved in four of the nine projects funded by the GEMINA program this year, receiving almost one-third of its $28 million awarded nationwide.

Named after the constellation Gemini, known as the twins, the GEMINA program is designed to fund technology that might drastically reduce costs of operating and maintaining next-generation nuclear power plants.

The four projects at Argonne funded by the GEMINA program are:

On each of these projects, engineers will work with an industry partner, harnessing Argonne’s nuclear expertise to solve real-world problems in the U.S. energy industry. Several of Argonne’s collaborators are developing new types of advanced reactors that will be the first of their kind.

These public-private partnerships benefit everyone involved. They help advance the science of next-generation power plants, provide industry with access to world-class research and development, and ultimately, reduce the cost of generating nuclear power.

“ARPA-E brings the national laboratories, universities and industry together to help nuclear startups to investigate high-risk R&D problems, which they may not have the resources to work on themselves,” said Alexander Heifetz, a principal engineer at Argonne. “Our goal with the GEMINA projects is to drastically reduce the costs of operation and maintenance of advanced reactors to make nuclear power more competitive with fossil fuel forms of generating electricity.”

Argonne’s largest GEMINA grant ($4.5 million) is for SSR APPLIED. Engineers on this project will collaborate with Moltex Energy to dramatically reduce the costs of producing nuclear energy for Moltex’s Stable Salt Reactor — Wasteburner (SSR-W), a design for an advanced nuclear plant that would run on nuclear waste.

To do this, Argonne engineers are building a digital twin of the SSR-W reactor, as well as an instrumented molten salt loop, to study how the system behaves in real life. The salt loop, which leverages Argonne’s longstanding experience in molten salt technology, will help the multidisciplinary team improve the mechanics of the digital twin, so the team can use it to simulate operations and maintenance strategies at an SSR-W in real-time. Their goal is to cut costs of operating the SSR-W facility from approximately $11 per megawatt hour (MWh) to less than $2 per MWh.

“It’s a real privilege to have this opportunity to work with these collaborators from industry who have been seeking to utilize Argonne’s expertise, facilities and simulation capabilities for advanced reactor R&D,” said Bo Feng, manager of the Reactor and Fuel Cycle Analysis group who leads the SSR APPLIED project at Argonne. “Being able to contribute in any way to the deployment of nuclear reactors, which generate electricity with zero carbon emissions, will be one of my proudest career achievements.”

As a partnership with Kairos Power, the MARS project aims to reduce the operating and management costs of Kairos’ nuclear reactor design through advanced sensing and instrumentation. With $2.2 million in GEMINA funding, Argonne scientists will develop new sensors that can handle the high temperatures and chemical environment of Kairos’ fluoride salt-cooled reactor. They will also develop algorithms using machine learning to analyze sensor data, helping to automate reactor monitoring.

“We’re trying to make the new reactors as inexpensive and safe as possible,” said Nathaniel Hoyt, manager of the  Process Simulation and Safeguards group at Argonne. “Through advanced sensors and automation, we can reduce the amount of money it takes to operate and monitor nuclear reactors.”

On the SAFARI project, Argonne engineers are also working with Kairos Power, developing the technology to automate advanced reactors using artificial intelligence and machine learning. With their $1.3 million in GEMINA funding, they will build a scalable digital twin along with digital tools to automate maintenance, operations and monitoring of advanced reactor power plants.

“Our objective is to develop the technology that will enable semi-autonomous operation of these reactors, so that staffing levels are reduced and plant economics are improved,” said Roberto Ponciroli of the Plant Analysis and Control department at Argonne, one of the principal investigators on the SAFARI project. “Underlying all of this automation are artificial intelligence and machine learning, which open up new possibilities for remote monitoring, control and operation of the reactor.”

The tools developed at Argonne for the SAFARI project will be tested at a molten salt loop operated by their project partners at the University of Michigan. Scientists will also apply SAFARI tools to Kairos’ fluoride salt-cooled high-temperature reactor design. This step will show the team how the proposed capability can be used to optimize plant design.

Using this data to develop Framatome’s digital twins will greatly improve their reliability and maturity. Framatome will use the digital twins to compare the passive cooling system with a typical cooling circuit. Ultimately, the research aims to identify the superior cooling system for their reactor, ensuring that their next-generation reactors deliver safe, carbon-free electricity.

Argonne National Laboratory seeks solutions to pressing national problems in science and technology. The nation’s first national laboratory, Argonne conducts leading-edge basic and applied scientific research in virtually every scientific discipline. Argonne researchers work closely with researchers from hundreds of companies, universities, and federal, state and municipal agencies to help them solve their specific problems, advance America’s scientific leadership and prepare the nation for a better future. With employees from more than 60 nations, Argonne is managed by UChicago Argonne, LLC for the U.S. Department of Energy’s Office of Science.

The U.S. Department of Energy’s Office of Science is the single largest supporter of basic research in the physical sciences in the United States and is working to address some of the most pressing challenges of our time. For more information, visit https://energy.gov/science.