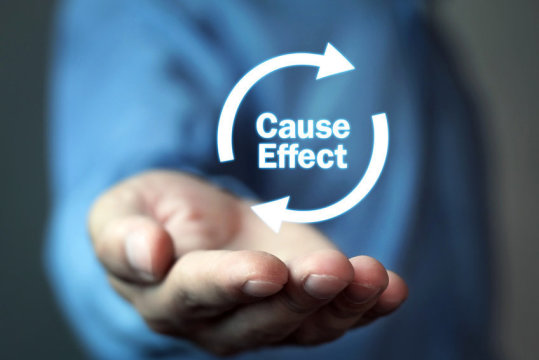 Natural little scientists, human babies love letting go of things and watching them fall. Baby’s first experiment teaches them about more than the force of gravity. It establishes the concept of causality — the relationship between cause and effect that all human knowledge depends on. Let it go, it falls. The cause must precede its effect in time, as scientist from Galileo in the 16th Century to Clive Granger in 1969 defined causality.

But in many cases, this one-way relationship between cause and effect fails to accurately describe reality. In a recent paper in Nature Communications, scientists led by Albert C. Yang, MD, PhD, of Beth Israel Deaconess Medical Center, introduce a new approach to causality that moves away from this temporally linear model of cause and effect.

“The reality in the real-world is that cause and effect are often reciprocal, as in the feedback loops seen in physiologic/endocrine pathways, neuronal regulation, ecosystems, and even the economy,” said Albert C. Yang, MD, PhD, a scientist in the Division of Interdisciplinary Medicine and Biotechnology. “Our new causal method allows for mutual or two-way causation, in which the effect of a cause can feed back to the cause itself simultaneously.”

Yang and colleagues’ new approach defines causality independently from time. Their covariation principle of cause and effect defines cause as that which when present, the effect follows, and that which when removed, the effect is removed. The team demonstrates the new approach by applying it to predator and prey systems. Moreover, Yang and colleagues showed that their model can work well in systems where other causality methods cannot work.

“I would expect the method to represent a breakthrough of causal assessment of observational data,” said Yang. “It can be applied to a wide range of causal questions in the scientific field.”