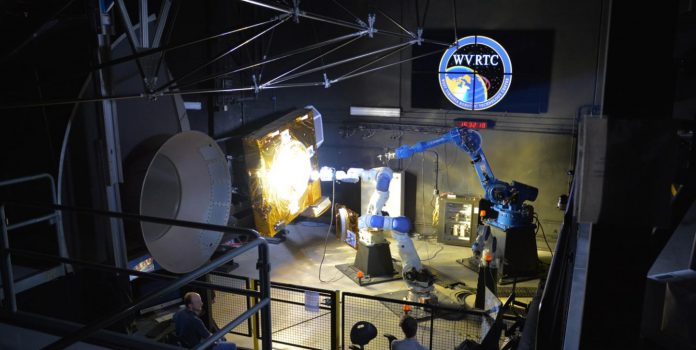 A new space race is underway throughout the globe and the renewed interest in space exploration is trickling down to the Robotic Technology Center at West Virginia University in a big way.

Maxar Technologies, a trusted partner and innovator in earth intelligence and space infrastructure, has announced over $2 million in funding for the Robotic Technology Center, from the $142 million NASA funded project, to assist them in performing the first in-space assembly demonstration of a satellite using a lightweight robotic arm.

Giacomo Marani, program manager and research engineer at the robotic technology center, explained that in this new Maxar project, known as SPIDER (Space Infrastructure Dexterous Robot), the robotic arm will be attached to the satellite servicing spacecraft bus being built by Maxar for NASA’s OSAM-1 mission (On-Orbit Servicing, Assembly and Manufacturing Mission 1).

SPIDER will assemble multiple antenna reflector elements into one large antenna reflector. This revolutionary process allows satellites, telescopes and other systems to use larger and more powerful components that might not fit into a standard rocket fairing when fully assembled.

Over the past decade, the Robotic Technology Center, operated by the West Virginia University Research Corporation, in collaboration withNASA’s Goddard Space Flight Center and Maxar, have been developing techniques to robotically capture and refuel a satellite in low Earth orbit.

“Together, we are developing a system that will rendezvous with, grasp, refuel and relocate a government owned satellite for the purpose of extending its life,” Marani said. “Most satellites were not designed to be serviced, so you need sensing solutions and complex robotic control algorithms that allow you to service and interact with something that was not made to do so.”

The robotic technology center will establish an independent verification of SPIDER’s capabilities through performance studies to increase the reliability of in-space assembly tasks as part of the project.

The technologies developed under SPIDER could ultimately enable entirely new architectures and space assembly infrastructure for a wide range of government and commercial missions, including self-assembling commercial satellites, human space exploration to the Moon and onto Mars under the Artemis program and in-space telescope assembly.

“We hope that if we are widely successful in our piece of this exciting effort, it will bring new opportunities for entrepreneurial and economic expansion here in the state of West Virginia and the continued growth of business and government facilities for related high-tech space activities in north central West Virginia. This is a great place for company expansion,” said Gene Cilento, principal investigator and research professor of chemical engineering in the Benjamin M. Statler College of Engineering and Mineral Resources.